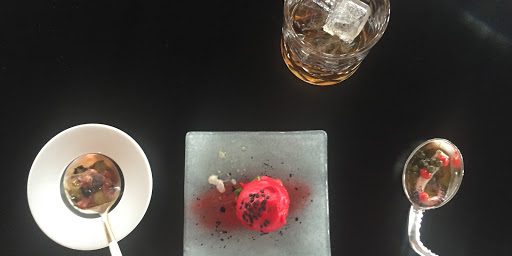 I think that we can all agree that 2016 has been a rather eventful year in many ways. Regardless of how depressing it’s been at times, there have been some foodie highlights to look back on. Here are our highlights of 2016.

Espresso roast beef short rib from Andy Annat at the Green Room was stunningly moist, boldly flavoured and just the thing on a cold January evening

White asparagus stuffed with crab meat and topped with caviar was served between courses at the Star at Harome but a definite highlight of the meal.

While in New York, we checked out the famous Katz’s Deli and tried a “Reuben” and a Pastrami on Rye. Simply some of the tenderest meat ever encountered.

A short hop to the other side of America found us eating sushi at Ryokos in San Francisco. Rejecting a menu and asking for the chef’s suggestions worked very well.

This delicately spiced sea trout at the Park made brilliant use of peanut and lime to bring it to life.

Liquid Nitrogen Mojito? Says it all really, courtesy of The Grand.

The Man Behind the Curtain was ludicrous, inspirational and sensational from start to finish. Definitely one of my highlights of 2016.

This Bramley Apple Cheesecake from Northcote’s collaboration with the Star Inn the City was exquisitely presented.

Giles’ highlight of the year
My best meal of the year must have been at The Star Inn Harome, not just because all the food is seasonal and locally produced. There is a menu to cater for every wallet from bar food to an a la carte menu and an amazing selection of local beer, as well as a large local cheese board. I have never been disappointed in any of the menu options from the venison burger, to the posh prawn cocktail and the rockpool, not forgetting the large selection of game and seafood.

Claire’s highlights of 2016
There were so many memorable food moments in 2016 that it’s almost impossible to choose. As a home cook I love discovering new ingredients. This year two fell onto my radar: sharp goat curd from Ribblesdale Cheese and British grown pulses from Suffolk based Hodmedods.
I have the great British weather to thank for my second favourite food moment. The unusually mild temperature throughout 2016 made this an excellent year for foraging. From elderflower to crab apples there was a plentiful crop for crumbles, jams and fruit gin. A busy year all round.

Grace’s highlights of the year
2016 for me was time-rich, so became a year of proper home cooking and baking. The York foodie Twitter community were there at 11pm when I needed to know where I could buy almond paste, (Tulliver’s on Colliergate). I jazzed up a cake with some edible glitter from Barnitts and Henshelwoods were reliable for vanilla pods. I’m thankful that York hasn’t been cleansed of independent shops, otherwise my baking would lack all the best ingredients!