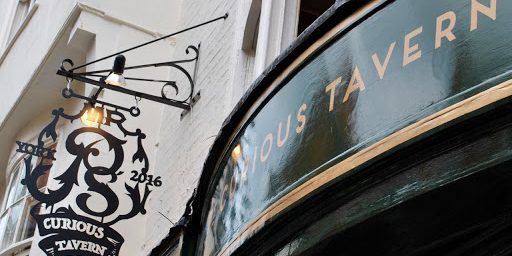 When we visited the Star at Harome not too long ago, I’d already got wind of Andrew Pern’s intention to open a new place in York and was excited at the thought. At the time, I hopelessly misjudged where it would be, but now it’s open, the cat, and indeed the location, is thoroughly out of the bag and Mr P’s Curious Tavern is open.

Mr P’s Curious Tavern is a departure for Mr Pern. While there’re bar spaces in both the original Star and its city-based sibling the Star Inn The City, this is no restaurant. That’s not to say that food here isn’t more than capable of standing on its own two feet though. The offering here is distinct from the Star(s), with a brief to be more adventurous and playful. Small plates are delivered as they are prepared and can be ordered as and when desire or appetite strikes throughout your visit.

The venue is packed with ephemera from Mr Pern’s collection and certainly has his style splashed all over it. The downstairs bar balances clutter and character with usability very well, while the upstairs is perhaps still waiting for its full compliment of quirk. Mr P’s Curious Tavern is somewhere to relax and feel comfortable without the formality of fine dining. This is certainly a place you can just call into for a quick drink or spend a more expansive evening having small plate after small plate delivered to you. As far as pricing goes, it’s accessible. A glass of wine starts at under four quid and the small plates start at only a few pounds for nibbles.

We started with a glass of white and a gin and tonic that was beautifully presented with a few raspberries as we perused the intriguing menu. It was extremely tempting to order one of everything, but realistically there wasn’t going to be enough appetite to tackle that task. We went for tuna sashimi, goats cheese ice cream with Waldorf, steak tartare, ‘Croque M’lass’, ‘Haute’ dog, ‘Egg n’ toast’ and one of the day’s specials that included pig cheek. We took a bit of guidance from the server about how much to order, pitching right into the middle of the suggested range and took reassurance in confirmation that we could order more as we went through the meal in the event of our collective stomach having the edge over our eyes.

First out of the blocks was the sashimi with scallions, horseradish, pink ginger and oriental jam. We were immediately blown away by the combination of flavour and texture both on the plate as a whole and rammed into each bite. The balance of delicate and strong flavours was struck perfectly to make sure that nothing was overwhelmed. The question raised was if this strong start could be maintained.

Yes. It could. Next came steak tartare. I’m a huge fan of this dish, but like to be a little pragmatic about where I order it. The only place previously in York I’ve felt comfortable to order it was at the Whippet Inn courtesy of a chef who’s now coincidentally working at the Star In the City, so I have to confess that in advance of this visit I’d already popped in and tried it. As was the previous experience, this was fantastic. The tartare is served with fried bread ‘sprinkles’ and ‘HP ripple’ ice cream. As I write this, I keep flicking back to the picture I took of it and struggling for words, the contrast between the savoury notes in the ice cream and sharp flavours of caper with the soft meat texture in the background is just magical. This is one of may favourite dishes in York.

Next to be delivered was the Croque M’lass. It’d be unfair to describe this as a toastie, but the dish draws deep of the comfort food well. Salmon, comté and quail eggs all thrust their way into the limelight in this marvellous plate, all the more so for six quid. Having polished that off we were presented with the goats cheese ice cream. Presented in a Kilner jar with a layer of Waldorf salad at the bottom under a generous dollop of the ice cream, you can probably guess what I’m going to say. Yep, another playful triumph! Letting the food be the theatre rather than messing round with unnecessary contrivances works wonderfully. Cold, savoury, cheesy ice cream? Yes, it works brilliantly.

By now, as I’m sure you can guess, our expectations were higher than Pete Doherty celebrating finding a hundred stupid hats in a cocaine factory, so I’ve got to confess a twinge of disappointment at the next dish. The ‘Haute’ dog with juniper cabbage coleslaw and fried onions was good, and for seven pounds, a cracking snack, but it didn’t live up to its predecessors. I’ve no idea what I was expecting, but by this point I suppose anything less than it tap dancing its way into my mouth while singing the national anthem was bound to be a let down. A perfectly acceptable dish that was all but drowned out by its company. Our final savoury dish was a special of the day that paired ox cheek and risotto to good effect with chicken thrown in for good measure. Yum.

At this point we were intending to call it a day, but our server dashed those intentions by insisting we take a sweet dish. He recommended ‘Egg n’ Toast’, which arrived in due course. With this plate we were firmly back in the realms of silliness: crisp toasts to dunk into a ceramic egg of panna cotta and fruity coulis counterpointed the conventional presentation against the light flavours.

Mr P’s Curious Tavern is now firmly amongst my favourites in York. The small plate concept works wonderfully. I love the idea of being able to get a snack of extremely high quality without having to commit to the time or financial outlay of a big meal out. I love the sense of fun that comes through in the plates. The moments at which Beth and I caught each other’s eye on sharing the first bite of a particular dish (that makes it sound way more like a date than it was) and just started laughing tell the story for themselves. We variously described the dishes as ludicrous, ridiculous, silly and just plain daft. Theatre for the sake of it around a table can feel contrived and really detract from the experience, but embedding it into the plate to become part of the food’s DNA makes perfect sense. I’ll have a steak tartare if you’re popping to the bar.

Disclaimer: Though our meal was complimentary, all opinions are our own