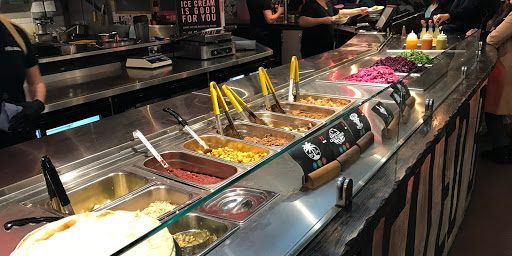 Inspired by travels through India, Mark Wright embarked in 2012 on a mission to bring “Incredible Indian flavours” to the UK street food market. After a lot of hard graft around London, Rolawala was offered a permanent spot in Trinity Kitchen just a short hop away in Leeds. I’ve vague memories of having failed to try their food at street food events in London so when I received an invite to hop on a train and give it a belated taste, you can guess what happened.

Trinity Kitchen sits at a slightly awkward intersection of trends. A street food court in a dedicated space in a modern shopping centre can feel jarring and I’ve heard of people refuse to visit on the basis of that inauthenticity, but you’d be more cynical than I to claim that you’d rather see the usual chain suspects in place of few rotating independents and several tenured occupants.

Of those enjoying tenure, Rolawala Leeds occupies a good sized space with ample opportunity to enjoy a relaxed beer with your food and plenty of chance to customise your snack. Choosing from a naan wrap, rice bowl or cauliflower rice to form a base, you then pick from various fillings, chicken naan wrap being my choice after I decided that ordering cauli rice with Keralan cauliflower would be a little too perverse even for my sense of humour. The manager took my suggestions on board (“pretty mild, yeah some extra paneer would be nice, mmmm coriander, no mate it’s up to you”) and duly delivered a foil wrapped torpedo heading for my appetite.

Paired with a good pale ale, the guys did well to translate my vague mutterings into a plate I would want. Fresh ingredients, well judged spice for my palate and fresh vegetables sat well in a perfectly judged portion (they aim for no more than 500 calories per dish) that should I ever suffer the misfortune of having to commute to Leeds would likely become a lazy Friday lunch treat. Despite a mix up regarding when I might arrive, the staff were absolutely on point and displayed exemplary knowledge of the menu and business. It would be no surprise to see these guys taking on a wider presence in the coming years.