The Black Swan at Oldstead 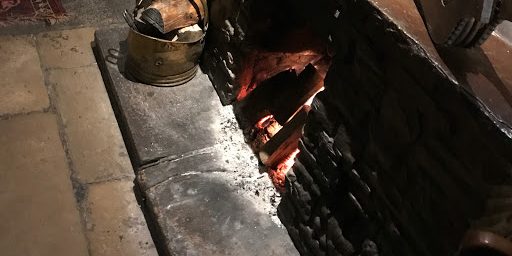 TV can do great things for a restaurant’s reputation, so when I learned earlier in the year that Tommy Banks of The Black Swan at Oldstead was to feature on Great British Menu, I cross-referenced that with several conversations had in which friends have raved about the Black Swan and insisted I was foolish for never having gone. This surprising feat of mental dexterity converted itself, even more surprisingly, into action and before the show started being transmitted, I had a table booked ready and waiting to bask in the smug glow of having been proved right by Tommy’s enormous skill forcing those who’d waited to book to enThe Black Swan at Oldsteaddure an agonising wait.

That prediction was pleasingly accurate with Tommy tweeting a few days after the conclusion of the series that extra staff had been struggling to cope under the weight of incoming booking requests. There would be no repeat of the wait to get into the Man Behind the Curtain!

Tommy Banks, it seems, is a quite a chap. Remaining the youngest Michelin star holder for two years, holding four AA Rosettes at the age of 27, developing an impressive kitchen garden from which to supply his establishment and paying enough attention to detail to make sure each dish is perfectly paired to the crockery are just a few of the talents on show. It’d be frustrating if he didn’t come across as such a thoroughly nice chap too.

Oldstead is a picturesque hour or so drive from York that takes in lovely views of Byland Abbey on the way. The Black Swan at Oldstead itself is an attractive building that would perhaps benefit from a ‘open’ sign on the front door to make it a little more explicit where one should enter. Once inside, the bar is welcoming and warm with a decent selection of local drinks. One curious omission was the lack of any handpulled real ale, a bit unexpected in the wilds of Yorkshire!

While seated in the bar, we had a couple of small amuse-bouches to kick off: smoked eel Lincolnshire poacher and beef headlining the flavours while the foundation of a crisped potato skin gave early voice to the enthusiasm for using all elements of the produce without compromising on taste. I’ve, so far, singularly failed to replicate this at home. I remained blissfully unaware of my own culinary shortcomings as we ascended to the dining room ready to get stuck into the many remaining courses.

The dishes that followed absolutely justified Tommy’s reputation and skills in menu development. Partridge wrapped in a sprout leaf and confit chicken dumpling are potential paragraphs all of their own while raw Galloway Beef could easily have been seen as a headliner, though I’m a sucker for well-presented raw meat.

That kitchen garden ethos raised its head again with the beetroot dish that landed next. Crapaudine beetroot isn’t the prettiest vegetable in the land, but it’s a very old variety that gets treated with huge respect and served with fish roe after roasting in beef fat. Scallop nestling in a two tier presentation dish gave rise to giggling under our breaths as we realised how lovely the pairing of flavours was. The king scallop did its best to compare itself to golf ball without giving up on any texture or flavour.

Halibut and venison came and went in a fug of taste and enjoyment before we started on the sweet dishes, having decided our appetite didn’t warrant a fifteen pound a head cheese supplement, with an interstitial course of ‘Lollipops’. I particularly loved the chilled celery lollipop, giggling enough in the process to embarrass my 37 years before the last plate we had served in the dining room. Douglas fir and sheeps milk with lemon verbena dessert with a douglas fir sour cocktail? After playing the “well darling I’m a food reviewer” card and ordering the drinks pairing, I couldn’t refuse, despite my dislike of cocktails, so it was a pleasure to pretend I planned it all along and enjoyed the cocktail. After cocktail and dessert proved themselves wonderful, we retired to the bar again for our final course where we started counting mice…

Robert Thompson furniture is something my family has fixated on for some time (for the record I have a cheeseboard and a small coffee table) so spotting examples is something of a hobby. The examples in this bar are well worth seeking out. If anyone has taken score of relative mouse content between Tommy and Andrew Pern, then I’m listening.

Hoovering up a chestnut, chicory and lovage cake while back in the bar didn’t take long before we hit the road to enjoy the floodlit views of Byland. We had a fantastic evening and some truly exceptional food which kicked £250 out of the wallet for two people which included one drink pairing. If you’re after value comparisons then the Star at Harome is the obvious choice and there’s not a massive amount between them. It must be said that the impressive ability of the Star to function as a Michelin starred restaurant and somewhere you can stroll to for a pint without feeling odd is not something that is replicated at the Black Swan at Oldstead, but there’s no doubting the quality of the produce, chef’ing or service. It’s pretty obvious that the coming years will hold even greater things for Tommy.