Walking through a field of Herbs Unlimited 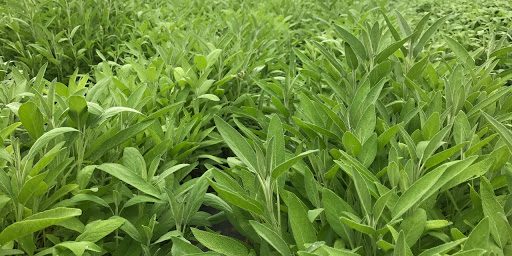 I’m sure by now that the whole country has had enough of hearing about fields of wheat so, for the sake of variety, I’ve been checking out fields of a much more fragrant nature with the marvellous people at Herbs Unlimited. Situated up near Thirsk, this is a herb farm of around a hundred acres that has now been supplying high quality produce for 25 years. What better excuse is there than a birthday to have a party!

The site is approached by a country lane that weaves through fields homing huge numbers of chives. The scale of the farm is truly impressive and the mild dissonance generated by such large expanses of such diminutive crops is striking. As you arrive to the heart of the farm, dominated by greenhouses and the administrative buildings, you can see that there’s not an inch of space wasted. Patches between the greenhouses are put to use producing whatever crop can be squeezed in, showing that no matter how nice it might smell, this is very much a working farm and a business.

After a brief introduction, we took a stroll up the hill to check out some of the fields, though at over a hundred acres, we were never going to take in more than a tiny proportion of the crops being grown. The smells as we moved around were almost overwhelming and mouthwatering, like walking through a kitchen garden on steroids, and the opportunity to nibble on leaves and petals was abundant. While we were never in danger of ruining our appetites, the depth of flavour was truly surprising with leaves and flowers that screamed of orange, apple and cucumber amongst others, while also looking striking.

Having been taken around the site, we congregated back in one of the greenhouses to wait for some snacks that would showcase the produce on offer. Three times Great British Menu contestant Steph Moon had been drafted in to sort the food out, so it was no surprise that everything on offer was spectacular. Yorkshire Wagyu tartare with oxalis, ravioli concealing a whole apple marigold leaf, orange thyme scallops, smoked salmon with lovage, oxtail donut with dittander and pomegranate & sweet cicely pistachio layers were just a section of what we were offered. We rounded out the food with fresh herb truffles from master chocolatier Andrew Thwaite before wishing the facility a happy birthday again.

This was a superbly organised day at a hugely impressive facility that it was an enormous privilege to be a part of. It’s no surprise at all that Herbs Unlimited produce is so well thought of and in demand. Happy birthday guys, here’s to another 25 years!