Country hospitality with The Plum and Partridge (closed) 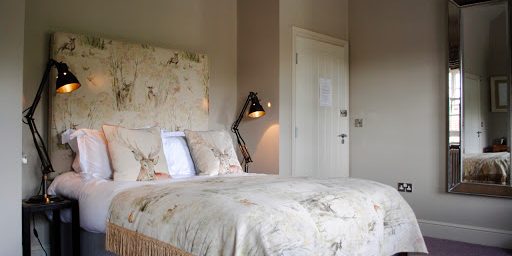 When you find yourself comparing images from Google Maps to publicity shots for a new establishment and trying to figure out out if you’re looking at the same building, it tells you something about the extent of the work that’s gone on. The Plum & Partridge is based in Husthwaite up near Thirsk, a beautiful part of Yorkshire, so I was glad to accept an invitation to enjoy a night’s stay. Alongside the rooms and extension, the restaurant has high ambitions to offer great food, so I looked forward to a comfortable, tasty stay in this recently reopened village pub.

After a busy week, my wife and I were due to arrive separately as she returned from a work trip and I made my way from York, so I was met by the friendly manager who made his way to the car park to find his assistance unnecessary, though I imagine most guests pack on a less minimalist basis than me and would be grateful for the help. I quickly got my bearings, locating the key areas (bar, menu, bedroom) and settled into the obviously brand new comforts. The room was luxurious without being over stuffed with unnecessary attempts to reflect the high end aspirations of the establishment, so after noting the lovely walk-in shower and large, comfortable-looking bed, I made my way to the bar to await my wife’s arrival.

The acid test of a country retreat such as this is its ability to diffuse tension so, entirely by coincidence, Mrs YoaF presented the perfect opportunity to check this as she came directly from Leeds Bradford airport after 24 hours working in Dublin. Thankfully the friendly, but not cravenly subservient, reception coupled with a gin & tonic made a good start on settling things down before we started negotiations with the dinner menu and let the staff get on with things.

It’s early days for the Plum & Partridge, open 10 weeks as of our visit, so there’s still plenty of scope for fine tuning. At present the dining area and bar are open and made up of one large space. It’d be an improvement to see a clearer delineation between the two, giving clearer space for the bar to service the village and the chance to have a preprandial feeling like you’re sat somewhere other than the restaurant. As it was, we made our way to the other corner of the room and took our seats.

We began our dinner with treacle cured salmon, presented with tomato sorbet and caviar and a prawn and crayfish crouton that was elongate enough to overhang both sides of its plate. While the caviar crowned the sorbet neatly, it didn’t add huge amounts of flavour, but the combination of the salmon and sorbet worked extremely well and I was impressed that the kitchen managed to plate up and deliver the sorbet on a warm day promptly enough for it to retain its integrity long enough for the dish to be eaten. The seafood crouton prompted a bit of a debate between us about the optimum size for a starter but, value judgements on portion control aside, was extremely well executed with a good balance of flavours in the fresh seafood.

Moving onto mains, we opted for hearty sounding dishes of salt beef brisket and ‘Claridges’ chicken pie. The salt beef brisket dish was the stand out of the evening, coming presented with a neat oxtail pithivier (disks of puff pastry moulded around a filling) and roast roots with a segment of crushed new potatoes on the side. The cylinder of brisket was well seasoned and the vegetables well judged in both quantity and preparation while the pithivier was delightful as it divulged its oxtail. While the flavours in the pie were spot on, the presentation is likely to prove divisive. Many argue that a pie MUST be fully enclosed in pastry and that anything else is nothing more than an over confident casserole wearing a hat but, laying such debates to one side, the body of the dish as well as the chips and carrots were good company to one another and unarguably delicious.

By this point, my arguments about the seafood crouton had started to feel more relevant as we approached dessert and we found ourselves unwilling to tackle a third course, to the chef’s regret as we found out the following day. Instead we opted to retreat to the comfortable bedroom and flop in front of the TV with the rest of our wine where we encountered the turn down service in the form of more friendly staff delivering chocolates, fragrant room spray, weather forecasts for the subsequent day and the offer of more drinks as required.

Saturday morning came around as quickly as ever so after enjoying the toiletries and lavish bathroom, we sauntered down toward breakfast. There’s no argument that at this point things went noticeably wrong. After a 40 minute wait, the dishes we received certainly didn’t do the venue justice. Having delivered this news to the manager, I’m not sure there’s much point labouring details but, caveated against the recent opening, this is something I’m sure will be improved upon.

This was only ever going to be a flying visit, but we left feeling refreshed and headed up the road to Sutton Bank for a stroll in the heat before beating a path back to York. The Plum & Partridge isn’t perfect at the moment, but there’s an obvious desire to work for the benefit of the local community and still deliver a special experience for guests. The kinks are acknowledged and being worked out while the food is being refined, so I’m sure I’ll be popping back at some point to see how things progress.

Disclaimer: Our accommodation and food at Plum and Partridge was complimentary in return for this review which, as ever, remains impartial. Our dinner, bed & breakfast night would have attracted a bill of £190 + drinks.