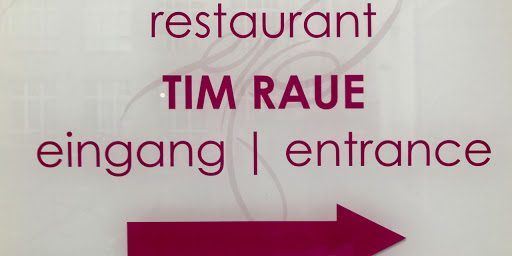 I find Berlin an endlessly fascinating city that never seems to shy from the events that have consumed it in recent history, letting them inform but not dictate its still evolving identity. After four visits, I feel like I’m getting a handle on how the city works and how its people operate, and have been no less enthused on each return visit, facilitated by ludicrously cheap flights from Manchester (thank you Ryanair!). The food in Berlin is unsurprisingly diverse and cosmopolitan while generally remaining unpretentious. Pizzas by the Spree and currywurst stalls feature high in my list of recommendations if you happen to be visiting. Like most other food obsessives, I’ve been working my way through Netflix’s Chef’s Table recently, so one episode caught my eye in the context of my upcoming trip – Restaurant Tim Raue.

Restaurant Tim Raue has a hugely impressive reputation, featuring in the (debatably useful) list of the World’s 50 Best Restaurants as well as that Netflix series which puts the focus on Tim’s difficult formative years and reputation for being a hard taskmaster. It seems clear that this background and the stature of his achievements inform that reputation. Perhaps most surprising of all is the price tag. Of course there are tasting menus consisting of many courses and matched wines, but this trip was to be with a few friends who, while clearly food fans, may not be as inclined to damage their wallets to the same degree as me. A three course lunch here will only gouge €48 from your funds; a pittance for food of the standard you’d expect here.

Accessed through an industrial looking courtyard around the corner from Checkpoint Charlie, the dining space is comfortable and welcoming without any of the horrific fine dining trappings such as crumb scrapers, hand bag stools or remote islands to rob you of dominion over your wine. The staff were smartly dressed without screaming formality (nobody looked askance at my wearing shorts) and it was a pleasant surprise to hear that it would be possible for guests to order either three, four or five courses individually without forcing a particular rhythm on the whole table.

With our requests made, we were delivered some pre-starters that set the tone clearly for what was to come in terms of flavour and spice. Delicate slices of pork fat reinforced with sesame, gem lettuce permeated with Asian spice and nuts to contrast textures set us up perfectly for starters. Dim sum “Japanese tuna pizza“ and dim sum “chicken stock, scallop & bamboo mushroom” were playful without being at all frivolous, with wasabi notes being perfectly judged. Every element of the dumplings was perfect, the stock offering monstrous depth of flavour but working in total harmony with everything else in the bowl.

As we continued through the meal, it became clear that every dish was going to be a highlight. “Pikeperch” in 10yo soy with leek and ginger came with the instruction to make every mouthful contain all the elements, while other dishes with less specific instructions also delivered, including those from the separate vegetarian menu.

Tim’s Peking duck interpretation was perhaps most theatrical dish to come out. Presented on three plates along with instructions to eat them in a particular order, the cubes of duck are something that will forever occupy my happiest memories. The duck liver mousse complemented with pearls of flavour which came across as a turbo-charged foie gras without the attendant ethical concerns and the broth that finished the dish somehow cleansed the palate without compromising itself.

To finish, I went for brie de meaux with black truffle and hazelnut while others picked sweeter options and were provoked into happy reveries about their choices. The brie was a staggeringly intense flavour and of a softer texture than one might expect, maybe one of the most intense flavours I’ve experienced but somehow tempered in its aftertaste to not compromise anything that’s gone before.

Tim Raue is clearly a man of singular drive and vision whose character appears in every element of the dining experience here. That drive makes this a dining experience with the emphasis on the food, with no ridiculous fripperies to please staid upper class diners for whom it’s as important to feel the staff are subservient as to enjoy the food.

The bill of €400 for five people who variously had three or four courses and enough wine to enjoy it all is, frankly, ludicrously cheap for an experience of this standard. Tim represents modern Berlin in many ways, borne of trauma, fractured relationships and difficult decisions but hewn by self-belief into something new and fascinating. I’ve every intention of returning both to Berlin and Restaurant Tim Raue.