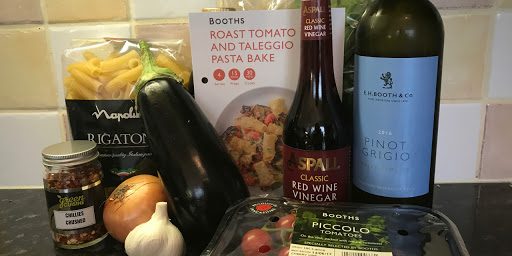 The only real problem with the British climate (weather, let’s not get political) is the inconsistency. It’s easy enough to acclimatise to a warm climate if you have a few days at it, while it’s also a justifiably quoted mantra that there’s no such thing as the wrong weather, only the wrong clothes. As such I found mI’yself knocking up a comforting pasta bake last week to comfort a brief period of inclement weather after a period of early summer. Never keen to search out a recipe, I splashed tomatoes, garlic, onion, wine, stock and so on liberally into a pan to pleasant effect while entirely forgetting that the next day I was due to head to Booths in Ilkley for a look at their produce.

I’ve mentioned more than once how much of a fan I am of Booths, so it was with pleasure I accepted the invitation to pop across the other side of Leeds and check out the newest happenings there on the understanding that I’d get a bag of their finest and a recipe card to take a crack at. As I arrived, I took a stroll around the store taking in the typically diverse beer selection, fresh vegetables and well stocked meat counter before finding myself with the Booths Customer Experience Manager for a chat about the company.

After 34 years with the company, it was obvious that Colin was a keen advocate and keen to make sure I understood things are still under the control of the family. While the last few years have bought some expansion for Booths, the appetite for further stress is clearly curbed for the moment while the emphasis shifts to maintaining the high standards of the current portfolio of stores. I could spend several hundred words recounting our discussions on quality produce, staff motivation, social responsibility and maintaining an active role in communities, but will suffice to say there’s a genuine desire to continue doing the right thing on all fronts.

As I left the store, I had a nose around my goody bag and dug out the menu card I’d been given only to find it was for a pasta bake! Choosing to take it as a chance to compare to my previous night’s stab in the dark, I dug out the scales and measures then offered the inevitable leftovers to my neighbours who were caring for the cats the next few days while we nipped to Berlin with friends. After assembling the ingredients I was left with a rich pasta bake, laden with cheese and flavour. Aubergine, red wine vinegar and fresh tomato made the dish feel pleasingly fresh, but the cheese was overdone with Tallegio and Lancashire cheese overwhelming things, sentiments echoed by my neighbours a few days later.

Booths remains a delightful place to shop and, to this date, the only supermarket I’ve seen offer potatoes just a few hours after they come out of the ground. It doesn’t sound like there’s one opening near York any time soon, more’s the pity.