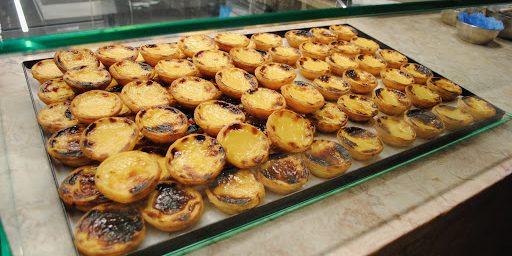 York is pretty marvellous, and marvellously pretty, but that’s no excuse for failing to explore the rest of Europe. My most recent jaunt was to enjoy visiting Lisbon via a convenient two and a half hour flight from Manchester that drops you off conveniently close to the centre of town. It’s an extremely steep city so take your walking shoes, but the upside of this is the fantastic views almost constantly on offer of either the river Tagus, ruined thing or castle. I won’t go into full on tourist board mode but here’re a few of the culinary highlights we found.

Just off Rossio you can find Figus, a trendy bar and restaurant that offers outdoor seating with views of the square on which it’s located. We had delicious monkfish with rice and tomato sauce, and battered salt cod neatly presented with rice, black olives and salad. It’d be easy to overcharge and be lazy in this location, but the food was good and prices very reasonable.

Time Out Market has built a strong following and far reaching reputation in the last few years since its opening. We spent a significant amount of time there and particularly enjoyed some fantastic pork cheeks with lardons, shredded cabbage and mash from Henrique Sa Pessoa, and Asian-influenced beef tartare from Tartaria. Sea Me did some noteworthy squid in cuttlefish ink tempura too. If this place was in York, I’d move in immediately.

After a warm afternoon exploring the castle, we followed up on another recommendation and found outselves admiring the view from Portas do Sol, which has a stunning terrace giving wonderful views. The pintxos were a bit unexciting – sun-dried tomato, mozzarella and cured meat not being a challenging combo – but the salt cod and chick pea salad came much closer to the mark. Neither dish could be called a disappointment though in this environment.

After a short train journey, we made it to the legendary Pasteis de Belem (essential when visiting Lisbon) to get our hands on some delicious locally baked custard tarts. We’d been lucky enough to get a tip from a seasoned traveller, so casually strolled past the massive queue (this place knocks out over 15,000 tarts a day) to take a seat inside for table service. The tarts were predictably fantastic, though, it must be said, not life-changingly improved from those available back at Time Out.

The final highlight came from Bonjardim Chicken. This place doesn’t make any fuss; it just gets on with serving shed loads of rotisserie chicken and spicy peri peri sauce for you to brush on yourself. A whole chicken, fries and a drink each came in at under thirty Euro for two and was the epitome of a single dish honed to perfection. Just don’t assume the bread rolls are complimentary – you’ll be charged if you tuck in.