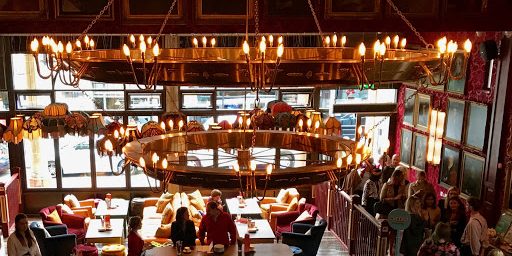 Last week we were invited along to sample some tapas and the atmosphere at the new Cosy Club York on Fossgate. This new addition to the casual dining offerings in York is situated in the former Macdonald’s furniture building that was originally constructed to house the first cinema in York. With a free bar and samples of tapas on offer, I wasn’t entirely surprised to find a decent sized queue waiting to have their names checked off at the entrance.

Having never patronised the furniture shop that used to inhabit this space, I’m not sure how it was laid out before, but the large space benefits from a balcony and prominent chandelier to prevent it feeling too cavernous, the guys are justifiably proud of that striking chandelier and the Cosy Club York space feels welcoming and interesting without being too cluttered.

There’s a wide variety of food on offer including traditional main courses, burgers, sandwiches and tapas alongside a tempting sounding brunch offering. The tapas we were served on the opening night included hummus with pomegranate, patatas bravas, mushrooms with tarragon and some chicken wings, which were the highlight. The wine list starts with glasses from under a fiver while there’re offers available on a wide variety of cocktails if you’re of that persuasion.

I’ll have to get back for a proper go at the food, but the early signs are that Cosy Club York is a nice addition to Fossgate that’ll cater well for a wide variety of occasions.