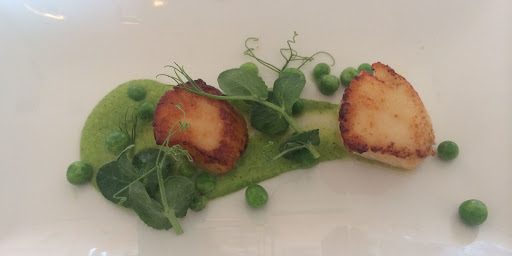 I’ve been told on occasion that I have terrible table manners. I lean my elbows on the table, wipe my mouth with my hands, slip out of my flip flops, eat from my knife, use my fingers and a present a litany of other petty openings for criticism. You may (or more likely may not) recall that my last visit to Meltons first Saturday meal was marred somewhat by the presence of a gentleman a number of years in advance of mine who was intent on making sure that the whole restaurant, and indeed most of Scarcroft Road, were in the thrall of his wise words. Arriving for the Melton’s sea food themed menu, it was with dropping hearts that we realised the same gentleman was sat behind us, seemingly substituting his daughter and her fiancé as companions for his son and his new girlfriend. The upstairs room at Meltons is small, though not uncomfortably crammed with tables, so it didn’t take long before we were exchanging pained expressions with the neighbouring tables’ occupants. Manners may be a (debatable) weak point of mine but English reserve apparently is not, so we endured.

Fortunately the Melton’s sea food was, as expected, good enough to distract from our entitled friend. Bread arrived soon enough along with a carafe of Muscadet, though we had to wait a little longer for the first course of Moules Marinieres. In fact mere seconds after we were debating asking if we’d been forgotten, one of the proprietors appeared to apologise and reassure us that the delay was a reflection of fresh prep taking a touch longer than expected rather than forgetfulness. Not totally perfect but honesty remains a better policy than defensiveness. The mussels were completely devoid of grit and superbly seasoned, covered in a sauce perfect to soak up with fresh bread.

The next Melton’s sea food course of scallops was also superbly presented: two pan-fried examples nestling over pea puree. Comparing inevitably to last Sunday’s meal at the Star the scallops were a touch over cooked, lacking a final few percent of taste and moisture in their core, but still a satisfying course sliced through with pea flavour.

Please don’t forget that all this time we’ve the simulacrum of superiority shouting in our ears, even drowning out our own attempts at conversation. Thoughts of the Sydney opera house, Australian wildlife and how best to obtain partial refunds on Wimbledon tickets hammered their way across the room. Sighing onwards, we tucked into lobster and fish: white fish and salmon, somehow miraculously boneless, resting amongst small cubes of carrot and celery, As with previous courses, the fish was topped with lovely sauce that didn’t rely on over-salting for taste.

Further treatise on the state of the railways (“how much did you have to pay for your ticket?”, “well I wouldn’t know would I”) woodpeckering into the brain jumped over the final course of seasonal fruits and wine granita (semi-frozen sugar and wine). Not really to my taste but the lemon shortbread and cream finished things off neatly without triggering my oversensitivity to sweet flavours.

Cutting short any thoughts of coffee, we settled a seventy-five pound bill for the Melton’s sea food with an owner sympathetic to our whining about our load companion, contemplating thoughts of how to avoid him on subsequent visits. Considering this gentleman further, I suspect he’d be horrified by my habit of holding a knife and fork in a single hand while sipping wine or my lack of deference to cutlery convention but utterly unaware of his own negative impact on his surrounds. Can I suggest, on this basis, that if you’re irritated by the lack of convention observed at an adjacent table then that’s your problem, but if you can’t avoid the braying superiority next door than that’s certainly not your problem. Isn’t that what good manners really are? There’s a phrase I like, the provenance of which I can’t remember.

“Opinions are like arseholes. Everyone knows you have one, nobody wants to hear it”