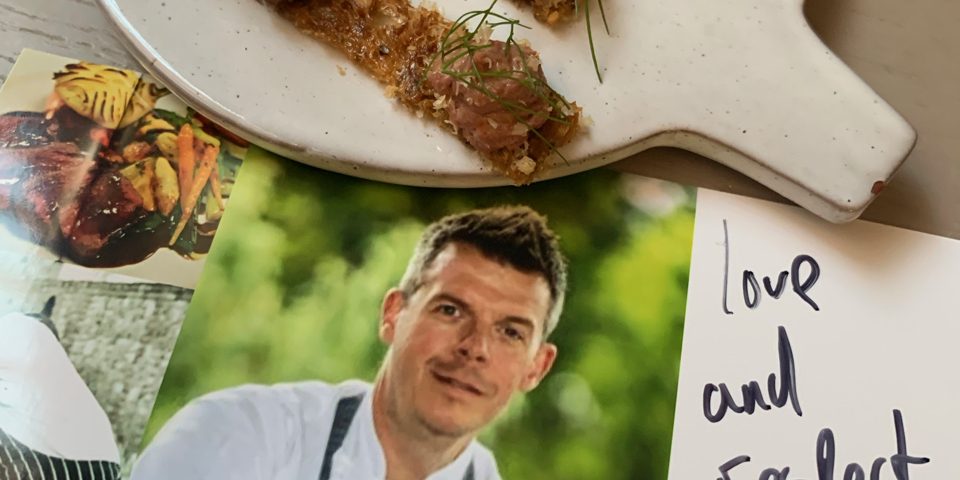 A dinner was held in York last week at the 3 Rosette Restaurant, The Park, by Adam Jackson to show support and raise funds for Yorkshire chef Tim Bilton who earlier this year was diagnosed with stage four melanoma cancer.

As widely reported last month, TV Chef Tim Bilton has battled on and off with cancer after first being diagnosed with a rare form of melanoma cancer in his eye six years ago.  After initial treatment, he was given the all clear until it came back a second time two years later.  Again, Tim underwent treatment and had operations to tackle the cancer and all was going well until earlier this year when he was sadly informed it had returned, but this time in a much more aggressive form and that it was now incurable.  The support for Tim from the hospitality industry since he shared this news has been overwhelming, with messages of moral support coming in from some of the country’s top chefs including Raymond Blanc and Tom Kerridge.

A fund was set up to help Tim and his wife Adele make special memories with their two young boys and also to help ease financial worries whilst Tim undergoes immune therapy treatment.  Upon hearing about this, chef Adam Jackson sent a message out to the Yorkshire restaurant and hospitality community and the response to support a dinner in aid of Tim and his family was immediate.

Last week the dinner was held at The Park by Adam Jackson in York and was attended by leading chefs and restaurateurs from around Yorkshire with many more who couldn’t make it also generously supplying meals and gifts as auction prizes to help boost funds.  The fantastic meal consisted of Adam’s renowned seven course tasting menu with the full ticket price of £65 per head going completely to the fund.  Dishes included sea trout broad beans peas and mint, a take on Tim Bilton’s signature dish of venison shepherds pie and liquorice; followed by cod, grapes lovage and girole; and pork cauliflower truffle and smoked garlic.  Desserts included lemon pistachio and cherry followed by an Earl Grey raspberry and vanilla pudding and summer truffle, all served with Adam’s pinpoint accuracy of flavour and presentation.

Acting as host front of house was HRH Group’s Managing Director, Simon Cotton, who welcomed the diners and became auctioneer after dinner, where the guests bid for a fantastic array of donated prizes including meals at Winteringham Fields, Skosh, The Burlington at Devonshire Arms, The Star Inn at Harome, Pipe & Glass and the Durham Ox to name a few.  Centrepiece of the lots was an amazing chocolate sculpture (pictured) of chef Tim Bilton in a kitchen kindly created and provided by chef chocolatier Ashley McCarthy of Ye Old Sun Inn at Colton.  The diners generously bid for this as a collective raising over £300 alone and then immediately donating it to Tim so he could share it with his children.

Food writer and photographer Wendy Preston was on hand on the night taking pictures and streaming live Facebook updates to Tim whose health sadly meant he couldn’t make it in person, but he was over the moon by the evening and social media ensured he could be part of the enjoyment without being there in person.

Tim’s wife Adele commented “It’s very overwhelming just how much love and support there is for Tim from his fellow chefs and peers in the industry. We both cannot thank Adam and his team enough for all the hard work that will have gone into to the evening and I’m sorry we couldn’t be there. At what is such a difficult time for us a family, it’s amazing people like all you guys that makes us all smile and be very grateful for each and every day.  As you know Tim is a very proud Yorkshire man and the hardest working man I know. To see him struggle to get out of bed every morning to go out to work to provide for his family just absolutely amazes me. This is what the hospitality industry has instilled into him. You can never ever take the chef out of him. Thank you to all you wonderful people and from the bottom of your hearts we are so very grateful. All our love The Biltons.”

Simon Cotton hosting said, “When Adam approached owner Philip Barker and I last month and said he wanted to put this dinner on for Tim and his family it was an easy decision to say yes and support it and we can’t thank everyone enough for their generous donations including many of our suppliers like Sykes House Farm, Anna Lupton, Hodgsons, Yorkshire Vintners, L’uva Italian Wines & Truffles and Cooper King Gin to name just some.  The response to wanting to either attend the dinner or at the very least provide a prize for auction was immediate and particularly generous and we were delighted that the night has raised over £5,000 for Tim and his family.  The Yorkshire hospitality scene is a very close knit one and when hearing of Tim’s heart-breaking story, it was humbling to see everyone rallying together to lend support.”  Adam added, “I was really touched by Tim’s story; he’s a chef in his forties with a young family. I thought, that could so easily be me and I immediately wanted to do something to help”.

With the generous audience, the evening raised in excess of £5,300 which will be going directly to Tim and his family to help with their memory making.  To help add to this and donate to Tim Bilton’s fund to help create further family memories please click here.