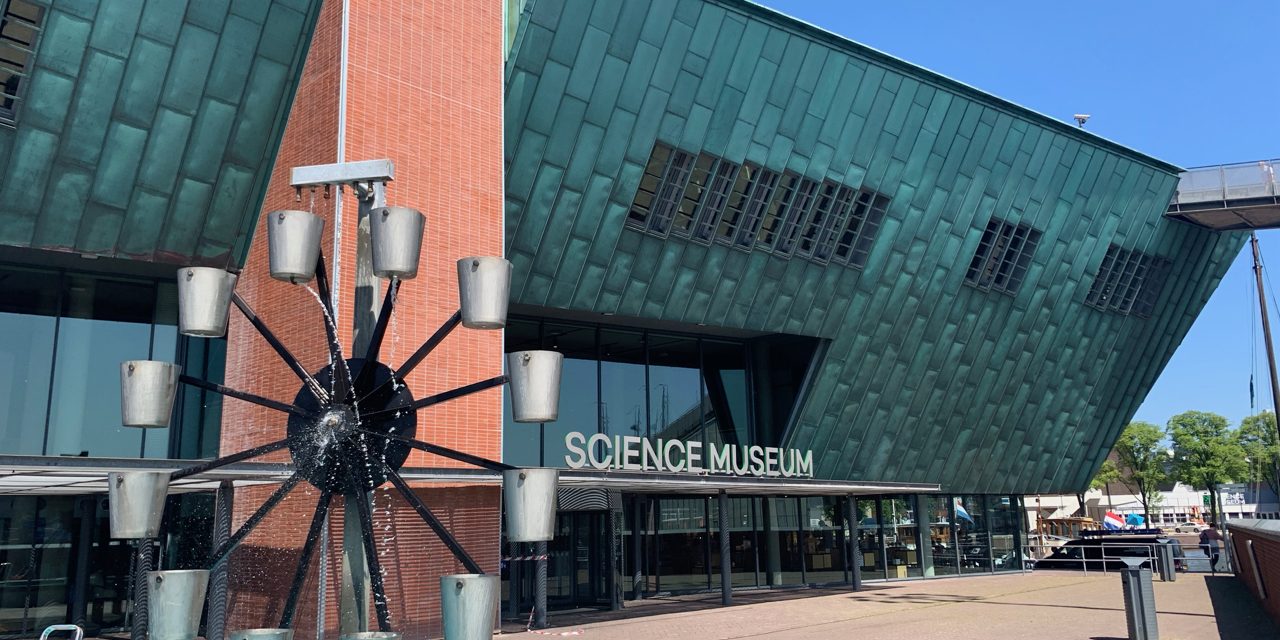 Regardless of the presence of Baby Fork (that should probably become Toddler Fork at some point) we were determined to enjoy as much of Amsterdam as possible. While tasting menus in Michelin starred restaurants might be off the cards at the moment, at least while we’re abroad without a baby sitter, there’s still plenty to keep us busy. These are the other things we found time for on this trip.

Nemo
After our food tour, we made our way back past Centraal Station toward the Nemo Science Museum. This is set across several floors of a striking building that slants dramatically toward back toward the ground at just a gentle enough angle to allow for a fabulous roof terrace. That terrace offers a bunch of water features to play in along with food, coffee and cold beer. The day we attended was 34c, offering the perfect chance for a suncream swathed Baby Fork to run around while parents indulged in that cold beer. She may have been a little young to take in the physics of a keystone in a bridge, but she loved running across it.

A’dam
The A’dam Tower is situated across the water from Centraal Station, a brief and frequent ferry trip that doesn’t cost anything, dropping you right by its front door. The tower is topped by an observation deck rotated 45 degrees from the axis of the main building, all the better for situating Europe’s highest swing. Entrance to A’dam includes a green screen background against which to grab a couple of photos for later comedy value before a lift fires you to the observation deck through a barrage of lights and sound. The observation deck gives fantastic views of Amsterdam and also gives access to a restaurant and bar.

Foodhallen
Food halls have become somewhat ubiquitous in decent sized cities over the last few years and we’ve taken in a good few in on our travels. Foodhallen is based in a former tram shed that’s had some of the tram tracks left in place to reference its former use and features more food vendors than it’s possible to sample in one visit. We checked out Viet View for a delightful platter of Vietnamese food before being tempted by some elevated bitterballen from De Ballenbar. These deep fried balls of roux are up for grabs all over Amsterdam, but throwing more flavours into the mix, they became more than booze soaking treats. The Bouillabaise and white asparagus ones particularly hit the spot.

Little Collins
On our final morning, we had time to schedule a decent brunch so I followed up on a suggestion from a friend who’d visited relatively recently. Little Collins has two branches, with one being situated in the De Pijp convenient for our final appointment. The menu was uncommonly varied and adventurous for brunch, letting us settle on a kimchi toastie and Turkish eggs. Bonito flakes helped bring the best out of the toastie, while I could have done with a touch less Korean bbq sauce, and the Turkish eggs came with perfectly judged labne, flatbread and spiced sausages. If you’re visiting Amsterdam this place needs to be on your list.

Hanky Panky
In 1996, I picked up a book on tattooing that fascinated me. It was a collaborative enterprise with help from renowned tattooist Henk Schiffmacher, who at the time operated a tattoo museum in Amsterdam. By odd serendipity in 2016, when I added a fork to the few tattoos I got 20 years ago, it turned out that the tattooist I engaged on the spur of a moment at a tattoo expo was Henk’s daughter Morrison, herself a highly regarded tattooist. After getting that tattoo, I left with the offer of having it touched up for free should I find myself in Amsterdam. The offer stuck in my head and before leaving, I took the opportunity to get http://www.illustratedbyabi.co.uk to draw a knife to match the fork she designed all those years ago. Morrison was good enough to fit me in at the legendary Hanky Panky tattoo parlour on the Sunday morning to add the knife and touch up the fork. I’m overjoyed with the results but it must be said, flying with two freshly tattooed biceps and a baby to control was quite uncomfortable.