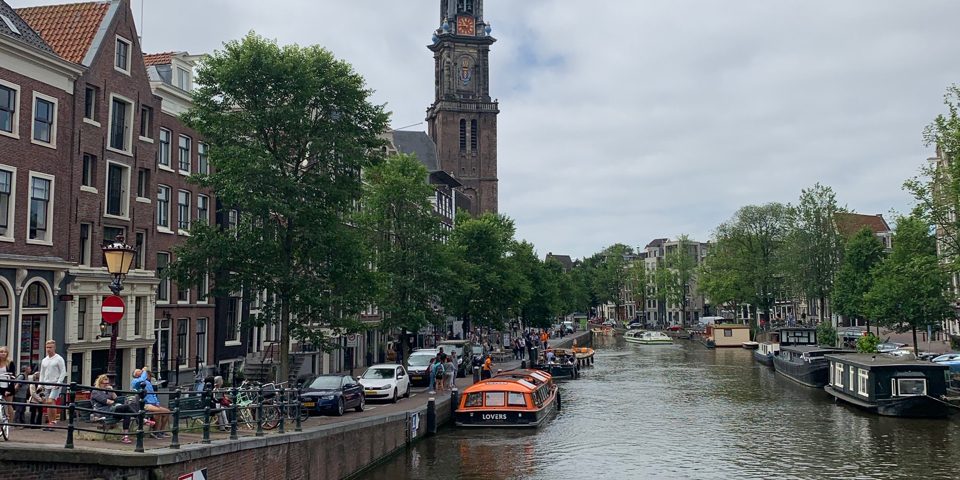 Turns out, travelling with a baby can be quite stressful. Who knew, eh? We’re both relatively experienced travellers and have honed our ability to pack light over many trips, something we knew would take a dent with the addition of a baby but the question remained, how prepared were we for our first travels with Baby Fork?

As I’ve posted about previously, we chose Amsterdam as the destination for Baby Fork’s first trip abroad. It seemed to offer a decent combination of a short flight time, good public transport and all the convenience a major European city can offer to cope with any unforeseen situations.

I can’t really imagine doing a hotel with a baby this age (16 months). Surely a successful bed time routine with a baby in a hotel room just results in a few silent hours trapped in said room trying not to disturb the baby? With that in mind, we booked an Airbnb a short train ride from the city centre that looked to offer the right balance of amenity and price.

We began our trip by driving to Leeds-Bradford airport where we’d stumped up for parking a short walk from the terminal to ensure maximum convenience, particularly on the return leg when we were unsure how well Baby Fork would have coped with the flight. This was more costly than the shuttle bus service we would normally plump for, but was worthwhile for the removal of a potential point of failure.

Security was relatively painless and the staff were perfectly helpful. This was when we started to appreciate the convenience of the Pockit stroller that we’d picked up from some friends, fresh returned from a trip to Sri Lanka. Being able to fold this into an improbably small package before reconstituting airside was a great advantage and much more preferable to having to check the pushchair into baggage.

Once airside, Baby Fork started to do laps of the area, an occupation complicated by the typically stag- and hen-heavy atmosphere. This isn’t something that’s particularly bothered me before, but seems to have taken an even stronger foothold since I last flew. While it never felt threatening, I was surprised to see people merrily strolling (stumbling in some cases) around the terminal with glasses in their hands outside of the bar areas that one assumes are licensed.

The flight itself was relatively uneventful, Baby Fork taking it in her stride as long as we occupied her, though becoming a touch agitated at the landing. It was a few hours later that we encountered the most significant issue of our trip when we missed a connecting train and therefore missed the local supermarket, thus condemning us to 12 hours subsisting on crisps while attempting to sooth Baby Fork to sleep with the random small bottle of formula we’d stuck in a bag as a contingency. We managed to get her to sleep just before midnight and in time to grab a few hours before setting about Amsterdam the following morning. More of that to follow in subsequent posts!

Regarding our luggage, we managed to follow our instincts for minimalism. You can see below the sum total of our packing, all of which went happily as hand luggage. Within this, we managed to cram enough nappies and wipes for the duration along with a good selection of baby food sachets to compensate for any shortfall upon arrival. Once situated, the range of food on offer in the supermarket was of course the equal of that on this island.

The next couple of days were spent buzzing back and forwards between Amsterdam Centraal and our apartment taking in as much as we could, though it must be said less than we would have fitted in as a couple due to fitting in the bedtime routine and pushchair logistics. After getting stocked up with appropriate groceries, our Airbnb turned out to be a very good base, further enhanced by the presence of a friendly house pest by the name of Furball who took every opportunity to dispense head bops and purrs.

The rest of our trip passed without incident and gave us plenty of things to think on when planning subsequent holidays. It was certainly challenging being in the centre of an unfamiliar city with a baby intent on running headlong into the path of every tram, bike, car and train, but we still managed to explore somewhere new to us and largely navigate the pitfalls of international travel with a small child.

While there was certainly a touch of heightened anxiety about the whole enterprise that might give us pause for thought about another similarly hectic few days in the near future, we can’t wait to show Baby Fork more of the world in due course…though we may take reins next time. Oh, one more lesson: flying with a baby after having both your arms tattooed four hours previously is both a literal and figurative pain. To be avoided if possible. Again, more of that later.