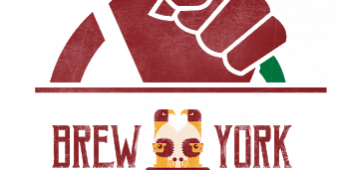 AN award-winning brewery in York has launched a crowdfunding campaign so local people can help create the biggest and best beer venue in the city.

Brew York opened its brewery, tap room and event space in Walmgate in 2016, and now plans a major expansion into the premises next door.

Customers who back the project can double their money in beer vouchers or choose from a range of other unique experiences.

Co-founders Wayne Smith and Lee Grabham say they have achieved their five-year targets already, and they are now ready to build on that success.

-A permanent street food kitchen and bar, in what used to be the Jack Raine Boxing Club

-The biggest on-tap beer range anywhere in York, with 40 beers available at a time

-A new pilot brewery kit, to allow more experimental beers, or to allow companies and groups to brew their own beer for events

-A new lift to ensure the new rooms are fully accessible

Today, they launch their Join The Brew York (R)evolution campaign, inviting fans, beer enthusiasts and local residents to help fund their growth by choosing from eight investment options. At the entry level, people contributing £50 will receive £100 back in beer vouchers. At the top end, people or groups who invest £3,000 can invent and brew their own beer at the brewery, design the packaging, receive ten cases of it and bring 50 guests to the official launch party.

Mr Grabham said: “Our first two years have been incredible. When we were home-brewing a few years ago, we dreamt of having our own brewery but we couldn’t have imagined just how popular Brew York and our beers would be.

“We’ve loved getting to know our new customers and regulars, and now that we are ready to expand, we want them to be a part of it. So if anyone puts £50 in, we will double their money in beer vouchers – and if you want to try your hand at brewing, or enjoy an amazing group experience here at Brew York, there are seven other rewards packages to choose from too, at crowdfunder.co.uk/brewyork”

The first target for the campaign is £40,000 but the more that is raised, the quicker the work can be carried out, subject to planning permission.

The campaign runs for three weeks from today, and will be promoted this weekend [April 13-14] at Brew York’s second birthday party, which will include live music, street food, beer from several of England’s most-respected young breweries, and a fundraising drive for the National Autistic Society.

The eight investment options include doubling your money in beer vouchers; free hire of the brewery’s mobile bar for your event; joining the team for a brew day; designing a beer with Wayne and Lee; a brewing tuition session; a beer tasting night; a beer cocktail masterclass in the hoptail lounge; a session cooking with the resident street food vendor, then pairing your creation with one of the Brew York beers.

All investors will also be invited to the launch party when the work is complete, and will be given priority in any further equity crowdfunding opportunities in subsequent years.

Mr Smith said: “Once the work is complete we will have the biggest beer range anywhere in York. Brew York is already a really popular place among York beer drinkers, but this will take it to the next level.”

To invest or to find out more about the campaign and rewards, visit crowdfunder.co.uk/brewyork