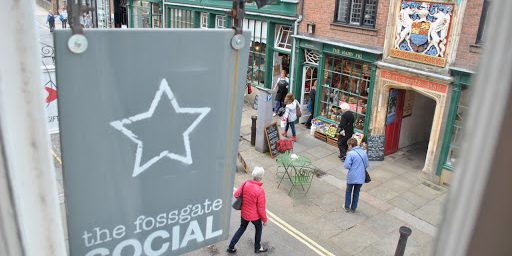 It really is all about the brunches at the moment as we adapt to interrupted sleep and baby preoccupied evenings, so it was with fortuitous timing that the Fossgate Social invited us along to try their new Fossgate Social brunch menu. The Fossgate Social has gone from strength to strength since the 2015 floods, hosting a variety of events while continuing to offer a wide selection of craft beers alongside great coffee. The guys are always keeping an eye out for new opportunities, as demonstrated by their recent pop up from Street Cleaver, who took over the kitchen recently with typically fantastic and interesting dishes such as bread and butter pudding spring roll with condensed milk. The latest opportunity to present itself was the chance to employ a new chef and revamp the brunch offering which obviously I was keen to take a look at.

The front tables in the Fossgate make a great place to people watch from, so we settled into one of the window tables to take a look at the Fossgate Social brunch menu. The main offering consists of open sourdoughs, pancakes and hot sandwiches while there are a range of specials to look at on a black board. We went for a selection, taking in avocado and crispy bacon, a halloumi burger and a black pudding stack. Plenty of good coffee was forthcoming while we waited for the food and chatted about what exciting developments might be in store for the Fossgate’s future.

Avocado may now be forever associated with millenials’ alleged profligacy, but that doesn’t make it any less tasty, especially when paired with bacon and poached egg. I might not be quite as fixated on avocado as much of my peer group but it’s hard to deny its appeal when layered and stacked amongst bacon, slices of home-made muffin and a poached egg. A stack of black pudding, muffin and poached egg with Hollandaise felt similarly indulgent, perhaps too much so as it would have benefited from a touch less of the black pudding. Matchsticks of apple completed the dish to add some sharpness. The last plate we tried was a “Social Halloumi Burger” which also featured roast tomato and peppers with spinach to temper the salty, toasted cheese; a relatively simple dish that did justice to good ingredients.

All the new brunch dishes I tried were excellent, though not a conspicuous bargain. I occasionally hear people comparing the drinks prices unfavourably here to more conventional pubs and the food pricing matches the ‘quality over quantity’ thinking, but the Fossgate Social remains a superb place from which to watch the world go by.