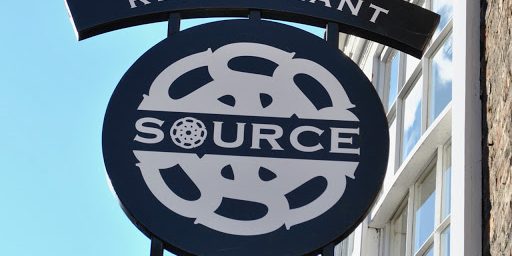 Eating out is proving a bit of a struggle at the moment. It turns out that a five week old baby really does have something of an impact on one’s ability to hit up restaurants, but this is a food blog and I’m not to be deterred! I’m not going to be put off eating out in restaurants (as long as it fits with my wife and daughter’s plans obv) but brunches are going to take, inevitably, a bit of a central role for the moment. One of the first visits Mrs Yoaf, Ms YoaF and I settled on was Source with the intention of taking advantage of the owner’s goodwill should a tantrum occur, knowing that they’d recently welcomed their own baby. The new Source brunch menu was also appealing.

Once we navigated the couple of steps to the restaurant, we got ourselves settled into a pram friendly window table and took a look at the new brunch menu. Source brunch runs from 0930 to 1430 and gives a neat bridge between the breakfast and lunch menus, with some intriguing options including a beef brisket Benedict which the owner had pointed out to me. I was predictably unable to resist the brisket Benedict while the other dish chosen came from the standard breakfast menu: a sweet potato bubble and squeak with guacamole, chilli and poached egg.

Once we’d absorbed some caffeine over a chat with the owner, our food arrived ready to fortify us for the rest of the day. I’d had the bubble and squeak before so wasn’t in the least surprised at how good it was; a neat puck of sweet potato topped and tailed with spinach and guac’ under a poached egg topped with strands of delightfully sharp pickled chilli. The yolk descended over the rest of the pile pleasingly and the rest of the plate made up a cracking way to start a day for £8.

The brisket Benedict was certainly a heartier option, as you’d expect for £12. A base of sourdough soaked up plenty of Hollandaise and yolk from the perfectly poached eggs, with a generous layer of 72 hour beef brisket. With a couple of hash browns thrown in to further bulk things out, this was an indulgent way to start the day and one that would need to reward the calories with great flavour. I don’t understand why I hardly ever see beef and eggs on a breakfast menu so this dish seems to occupy a pretty unique spot in York, one that is suitable reward for a visit to Source. Everything in the skillet in which it was served was superb, including the rather surprising addition of barbecue sauce. I’d have been rather cautious if warned in advance of this, but the small amount of sauce between the sourdough and beef was more than a gimmick, bringing an unexpected but not overwhelming extra element. I’m less of a fan of serving in a skillet though. While it suited the dish visually, it obligated me to elevate elbows uncomfortably to reach the corners of the dish.

It’s likely you’ll see more from me about brunches out as we make some inevitable, baby-led, changes to our lifestyle and Source brunch is sure to be a venue for repeat visits. Let me know if you enjoy the brisket as much as I did, I’m eyeing up the breakfast nachos for next time!

Disclaimer: No charge was made for this meal, opinions remain impartial.