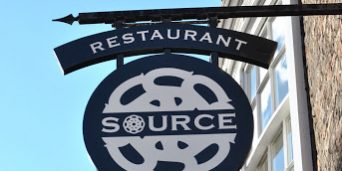 Castlegate has changed a fair bit over the last couple of years. The Little John has become the Blue Boar, Pairings has successfully set up shop, while the nook continues to forge an identity for live music and Rustique maintains a strong reputation for food. The latest addition to this street is Source restaurant. Set up to offer a combination of slow meats, superfoods and vegetarian, there’s a broad range on offer. And of particular note, the menu offers a rough fifty-fifty split between vegetarian and carnivorous options, while also concentrating on staying health conscious.

With Adam Lyons running the open kitchen and wife Katie looking after front of house, there’s a strong background of cooking and hospitality ready to underpin Source restaurant. Adam has been involved with the Aldwark Arms, Jamie’s Italian and the Royal York (post its recent transformation), but with the opportunity coming to strike out and open his own place, things are changing further on Castlegate.

We arrived at Source restaurant at seven on a Thursday evening and I was immediately taken about at how busy the place was. Source had only been open three weeks at the time and, that early into the journey, I’d usually expect to see lots more empty tables while word percolates through the town. In fact, the guys have had to turn tables away on some nights; testament to their choice of location at the end of the street where there’s a lot of footfall.

The Source restaurant interior is distressed to just the right degree. There are bare wood surfaces and filament light bulbs aplenty along with attractive quirky light fittings, but it’s not overdone or forced. We were lucky enough to be sat facing that open kitchen so, after encouraging Adam to stick his head out for a photo, we had a good view to enjoy while flicking through the menu’s different elements. The three elements that are highlighted are “Slow Meats, Superfoods and Vegetarian”. York does have a couple of go-to places for vegetarian food but what’s unique here is the intention to cater so effectively for both vege’ and carni’ diners with intriguing sounding dishes on both sides of that particular balance sheet. One could be concerned about the other two elements of that trifecta, with both superfoods and slow-cooked meats being very in vogue at the moment, but after hearing Adam speak passionately about provenance, quality and health, I don’t have any concerns that these specialisms are mere box-ticking.

To start with, the three of us chose cauliflower florets, buffalo wings and lime-grilled avocados while we ordered a bottle of Australian shiraz to keep us company. We noted the extremely good value prices in the short interval between ordering and our dishes arriving before noting the simply-presented food that let the colour stand out. My favourite of the three was the buffalo wings (thanks for the taster, Grace!) which shed meat from bone with little persuasion and had a subtly sweet flavour. I can’t comment on the avocado due to a mild, but irritating, allergy but I’m assured it was lovely. I can certainly agree that it was neatly presented on a flat board that required great skill to prevent rolling off during transit. Cauliflower is a much under-appreciated vegetable whose meaty texture gives a good basis for main dishes. In this case the florets were al dente and surrounded by rocket leaves and pomegranate seeds and combined to balance out nicely. We all agreed the spice on the cauli’ was a bit too aggressive, but the dip softened it off to a significant degree as we reflected on the portion size being in danger of jeopardising appetites for the mains.

We selected shredded chicken, shakshuka and pulled jackfruit to get a good range of the produce being shown off. All of these dishes came with a chunk of cornbread more impressively light than anything I’ve attempted myself by some margin. My shredded chicken (free range of course) was saturated with flavour and offset by plenty of sweetcorn and spicy Yorkshire chorizo. The chips were soft and accompanying slaw refreshing and crisp without being drenched in dressing. The Shakshuka was presented in a piping hot skillet with another side of corn bread. I didn’t taste it but it looked a good representation of the dish, the eggs yolks remaining soft and luscious. The most unusual dish we tried was BBQ style pulled jackfruit. I’ve got to confess to not having seen this on a menu before but I’d heard the flesh made an eerily convincing meat substitute. Served with the same sides as the shredded chicken, you could easily have mistaken this for a meat dish. The ‘meat’ was topped with jalapeños and, without foreknowledge, you could have mistaken the texture for pork pulled through BBQ sauce.

It has to be said that the pricing was extremely reasonable with mains ranging from £8.50 to £14.50 and starters as little as £3. Portion size was generous too, large enough to put desserts beyond reach and line up a nice lunch of leftovers. There were a couple of minor rough edges, certainly no more serious than I’ve seen in other newly opened establishments, but the service was seamless and friendly and the high standards to which the guys want to hold themselves evident. I don’t doubt that Source has a bright future!

Disclaimer: we were invited to enjoy a complimentary meal, the opinions here are the reviewers own