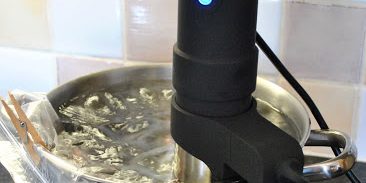 Own up. Who has a bread maker sitting unloved at the back of a cupboard? How about an ice cream maker? Yoghurt maker? I’m guessing that most people who like to think of themselves as having an interest in cooking at home have a source of nagging disappointment and shame hidden in the back of a cupboard. Perhaps you’ve also read the reliably amusing ‘Inspect a gadget‘ series in the Guardian too? With that in mind, it’s unsurprising that I approach the potential purchase of a Anova Sous-Vide wand with a little scepticism.

Sous vide is a cooking technique that’s been around for plenty of time in restaurant kitchens, but hasn’t really gained traction in the domestic setting thanks to a combination of cost, perceived complexity and actual complexity. The term ‘sous vide’ translates as ‘under vacuum’ which, for these purposes, isn’t strictly necessary. The objective is to maintain a steady temperature across the whole of a water bath that allows you to seal food into a plastic bag, either manually using ‘immersion’ or with an automated vacuum sealer. The idea is that keeping the item you’re cooking sealed from the elements will prevent moisture escaping while the accurately controlled temperature will prevent overcooking. If you’re so inclined you can read lots more incredibly detailed information on the science about it all around the internet.

When the Puboholic started raving about a new gadget he’d bought that was allowing him to water bath at home, my curiosity was piqued, but lingering scepticism prodded at the sides of my impulse-purchasing drive. The Anova Sous-Vide Precision Cooker looks the part (although, it must be said, looks also like it’d be capable of conducting a detailed survey of any orifice) and ticks fancy boxes for having Bluetooth and (optional) wifi connectivity to allow control through an app, along with remote monitoring. The concept is relatively simple: clip the device to the side of any suitably large water receptacle and the wand will circulate the water while monitoring its temperate and maintaining it to within 0.1c. When your selected cooking time has elapsed, your phone will alert you and when you’re ready you can remove and finish your food.

After listening to his tales of stunningly moist meat for another week or so and having received a generous cash birthday gift along with instructions to indulge myself, I caved and placed an order for the Anova Sous-Vide. Note that by submitting your email address at point of purchase (only on Anova’s website) at the time of writing this, you can get a £40 discount that makes the device a more easily justifiable £130. A few days later, I was excitedly debating what to do with my shiny new, rather invasive looking, toy.

I can’t deny that this technique demands a few more steps than conventional cooking, so here’s a breakdown:

This is a few more steps than chucking a bit of meat into a hot pan, but nothing too technical and, if you care about your steak, you’d be likely to do a little more than just chuck it in a pan. All that was left was to retire and debate how much to ruin my appetite in advance of later company. Fast forward 53 minutes and I eagerly removed my meaty parcel ready to sample. At this stage of the process, while the meat is fine to eat, you’ll want to be searing your steak. As it comes out of the bath, the texture is oddly fleshy as it’s acquired none of the crust delivered by our beloved Maillard reaction. This is something corrected by a few seconds on each side in a blazing hot frying pan, along with adjusting seasoning if required before the moment of truth.

In my excitement I didn’t rest the meat as I should have done so there was a little more blood than presentation would favour but the results were stunning. Incredibly moist and flavoursome, but a slightly tougher texture than I’d hoped for, it was nonetheless a match for most meals out despite being a cheap supermarket steak. The first opinion I garnered was Rod the plumber who agreed it was absolutely fantastic. My long suffering wife managed to make some sounds of agreement between chews too, so I took a few bits to next door to similarly positive impressions.

Next up for the same treatment was sirloin (as opposed to rump). Fast forward another hour and with a bit more resting (the steak, I did some housework) another neighbour was sent off with a few chunks to try his son on after proclaiming it fantastic himself. Ten minutes later, he was shouting across the fence to relay the news that said son was demanding he buy one!

Now happy I could knock out repeatably great steak just using the guide and Anova Sous-Vide, my dinner guest arrived clutching more steaks, so we popped in a ribeye and another sirloin, chose a setting to reflect the fattier cuts and pondered only a few seconds before heading to the pub where we would continue to keep an eye on the cooking process thanks to that app. Earlier in the day I’d prepped some chips to get them ready for the fryer and sliced a few carrots so there was remarkably little to do. When the time came, there was more searing, a sensible amount of resting (steak and human) and plating up to do. The results were fabulous. The equal of the majority of restaurant steaks I’ve ever had, both cuts were perfectly moist and strongly flavoured without losing too much juice onto the plate. I’d intended to chuck a fillet through it too, but was starting to run out of appetite by this point. For the record, I served it with twice cooked chips in truffle salt, carrot and feta puree and baby asparagus, all of which went down extremely well with plating duties handed to Mrs YoaF, as is traditional in our house.

Initial signs are that the Anova Sous-Vide will be a staple of my cooking for the foreseeable future. I’ll post another update when I’ve tried something else. Don’t expect that to take too long.