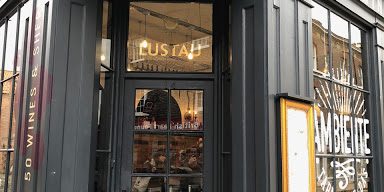 Since arriving in the city in 2010 from its previous home in Malton, Ambiente Goodramgate has established itself firmly as a stalwart of the York food scene which now offers two venues in the city. That original Ambiente Goodramgate continues to offer more intimate surroundings while a larger venue on Fossgate offers a livelier environment that remains welcoming and quiet enough to enjoy one’s food and surrounds. The number of quality restaurants in York has increased hugely since Ambiente first opened its doors, raising the standard as competition increased, so it’s essential that existing businesses carry on raising their game. This isn’t something that Ambiente has lost sight of though and to that end they recently sent a bunch of lucky chefs out to Andalucia on a research trip. I went along to check out the new menu being served at Goodramgate based on the fruits of their research.

When we visited to check out the new menu, we were leaving 4 week old baby YoaF out of our hands for the first time so resisted the temptation to linger in the front bar over a flight of sherry, rather settling straight into a snug corner table in the downstairs dining area for a chat about the new menu. There may be a few branches of Ambiente these days (Leeds and Hull joining the York sites) but the willingness to give distinct menus makes sure that while the DNA of the experience remains true throughout, each venue keeps a sense of individuality.

We kicked things off with a Spanish seafood platter to share which came with a generous portion of bread and “picos de pan” (reminiscent of breadsticks) to mop up a side of salt cod pate. Our server had raved about the new Cantabrian anchovies so I made a made sure I was rude enough to grab the first mouthful and confirm that the recommendation was more than just an employee’s hyperbole. The Boquerones that have frequently appeared on Ambiente menus for some time remain as delicious as one would expect good quality marinated anchovies to be but the newer variant brings boast worthy subtlety and depth along with the sharp anchovy. Elsewhere on the platter we enjoyed fabulous tuna belly and salt cured tuna along with tender thinly sliced octopus.

Having enjoyed our seafood, we moved onto a couple of hearty meat dishes. A “Bola de Cordero” slow roast lamb shoulder croquette on squash puree revealed plenty of rich, slow cooked shredded lamb to contrast with the crunchy exterior. Not the most subtle dish but absolutely satisfying. Next up came “Ragu Española” which put braised beef shin with pasta. I’d not expected to be so impressed with pasta on this trip but the short strands here were superb and made a luxurious dish with the generous and rich beef ragu it shared a bowl with.

For some vegetable relief we chose wild mushroom, kale and feta empanadas garnished with oven roasted grapes in masala and a balsamic beetroot with baby onion salad salad. The baby onions with the beetroot were dyed red by the root veg leading to a very red plate of food broken by dill garnish; any lack of visual variety being made up for by an abundance of flavour.

I was really impressed with the new menu that offered plenty of great, bold flavours at really sensible prices. Our lunch attracted a bill of less than fifty pounds including a glass of sherry each. While the standard for eating out in York has risen markedly over the last five years, Ambiente certainly hasn’t been left behind and the Goodramgate branch remains a welcoming place to enjoy great food and sherry.

Disclaimer: No charge was made for this meal; all opinions are impartial.