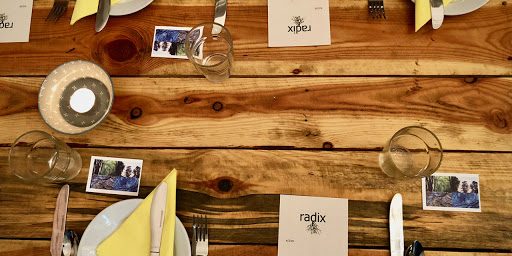 If you’ve been paying even the least attention to social media over the last few days, you’ll have seen the Sunday Times proclamation that York is the best place in the country to live is mentioned over and over. Having lived in York for nearly 17 years now, I thoroughly agree with this judgement. It’s felt like the city has become increasingly adventurous and dynamic over those years and that the food scene has become even more of a city trademark over the last four or five years. Clearly the learned people of the Sunday Times agree with me as they made specific reference to our “cool cafes” and “destination restaurants”. I recently had the opportunity to check out the beginnings of what may end up a destination restaurant, hosted in a cool cafe – Radix Dining.

Radix Dining is the brain child of Craig Rogan and Monty Kanev whose combined CVs feature plenty of serious names including L’Enclume, Fera, The French, Alimentum and Van Zeller. Radix is Craig and Monty’s joint endeavour to offer a relaxed dining experience with an experimental menu that sited its first event in the new FortyFive cafe to reinforce its casual atmosphere. With those entries across their CVs I was more than keen to head along to check out how the first pop up went despite the entrance of baby YoaF to this world two weeks previously. Fortunately the sleep deprivation didn’t keep me from enjoying the food!

The FortyFive Vinyl cafe is a comfortable spot on Micklegate that’s been making a name for itself since its recent opening. The daytime offering focuses on comforting toasties (that are on my hit list) but the space lent itself perfectly well to casual dining with the tables set appropriately for our arrival and enough space left to prevent each party invading one another’s space. The six course menu read well and the onion based snacks we paired with gin cocktails from Defiance gin helped prepare us for our first course.

First to the table was a dish described as “violet potato, lovage, cheek and leek”. The reductionist naming left me a little concerned about the inclusion of purple potatoes but the guys managed to create a dish that allowed me to enjoy that ingredient for the first time. Purple potatoes have a mixed reputation for turning to starchy powder if cooked anything other than perfectly but their use as a base to complement rich seams of ox cheek and sharper lovage was a reassuring change here which augured well for more innovative dishes.

Next to get to grips with was a vegetable “tagliatelle” of roots with hen of the woods mushroom and Lincolnshire Poacher. The threads of root vegetable in the bowl were softened to just the right degree and had their earthiness perfectly complemented by the sharp cheese running through the plate without getting into one’s sinuses as you might fear form a strong cheese. The following fish course of barbecued halibut was more conventional but accented with superbly crisped shards of chicken skin (I want these as bar snacks everywhere from now on) before we were hit with the meat course that paired venison with black pudding and various presentations of beetroot. A potential pitfall for pop-ups is hitting the standards desired despite facilities that aren’t necessarily intended for this style of food, but there was no hint of compromiuse in the presentation. The venison came to the table perfectly and hit it off well with the various textures of beetroot and black pudding to make a seriously satisfying plate of food.

Before the final sweet dish, we had the chance to take down a pre-dessert of a mini cheese and citrus cornet. With palates suitably refreshed we finished the meal with a chocolate and red grape gateau. I’m not entirely convinced that red grapes are essential to chocolate gateau but the chocolate put a nice full stop against the meal.

There really is loads of great stuff happening in York at the moment so it’s nice to hit something with the potential to make a significant mark early in its development. There are serious challenges to presenting this style of food in a venue that takes in one evening at a time and the guys bested them with aplomb. I’m happy that media such as the Sunday Times recognise the great stuff happening here, but it’s even more fun to check out the early gestation in the next stage. Thanks for a lovely evening guys. Check out here for future events.

Disclaimer: No charge was made for my attendance, opinions remain impartial.