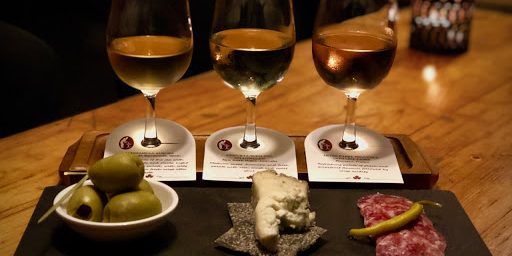 Over the last few years, several establishments have entered the drinks scene in York who offer a much broader range of wine styles and ambiences. While there is still ample opportunity to pay over the odds for a glass of something forgettable in many pubs, places such as Veeno and (the nationally reputed) Cave du Cochon have raised standards a great deal. Prominent in this movement has been Pairings Castlegate who’ve done a superb job of establishing themselves as one of the best places to enjoy quality wine in York.

The name “Pairings” is reflected throughout one’s experience here and can be represented neatly through the option to order flights of a variety of wines, each of which comes presented with tasting notes and a morsel of food to pair. To my shame, I’d not been to Pairings Castlegate in some time (there are so many places to get around these days!) so when the opportunity came to sample a pairing flight came up, I jumped at the chance.

Service at Pairings has always been a strong point, so it was little surprise to find ourselves seated comfortably by one of the friendly sisters whose passion has been key in establishing the venue. With menus and chat exchanged, we got onto the serious business of choosing our wines.

The flights available offer the opportunity to pick and mix styles, which I took advantage of, while Grace (accompanying me for the evening) opted for a “light and fruity red” flight. My selection came to £16 pounds including the paired morsels while Grace’s three 75ml glasses attracted a bill of £11.

First up for me was a Manzanilla Aurora sherry that was paired with some beautifully sharp olives rather than the advertised Manchego. Sherry is a much underrated drink still and surely due a renaissance soon and this example matched the tasting notes perfectly with almond and olive coming through nicely from the refreshing glass. I can’t recall if there was any particular reason for the olive substitution but I’m the last person who’d complain about having to eat olives while drinking sherry. For my second glass, I’d gone for another style that doesn’t get the credit it’s due: a Gewurtz/Riesling blend that butted up against a delicious Picos blue cheese. The Riesling softened off the more floral tendencies of the Gewurtz and both did a marvellous job of cutting through the fat of the cheese. For the final flourish, I’d been more strongly guided by the thought of truffle salami so plumped for the rosé that would accompany it. Once again the tasting notes were easily recognisable in the drinking with peach and grapefruit coming out to play with the wonderful salami.

Over on the other side of the table, Grace was making a good job of enjoying her flight of reds. She noted that the Allegory Pinot Noir that she started with gave up plenty of deep berry flavours; the Beaujolais that followed it was as smooth and fruity as one would hope while being more subtle than the Pinot Noir. The Austrian Thermenregion that finished proceedings had a strong marzipan flavour which Grace found moreishly enjoyable.

Pairings Castlegate remains a lovely place to relax and every mouthful of wine and food we enjoyed was superb. A wine flight here is not the cheapest way to get a glass of wine in the centre of York, but there’s no knocking the quality and the few extra pounds buys you a significant and enjoyable amount of variety to reflect on while enjoying the unarguably relaxed surroundings.

Disclaimer: I was invited to enjoy this evening at no cost. Opinions are impartial.