Back to Goldsborough Hall 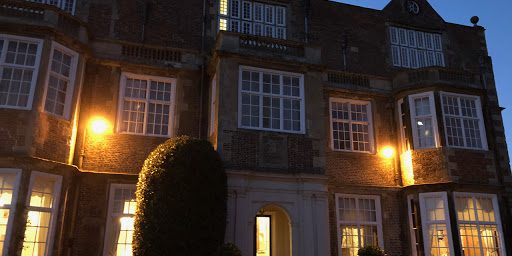 Over the last few years, I’ve visited Goldsborough Hall several times and never failed to be impressed by the surroundings, food and welcome on offer. Goldsborough Hall is home to Mark and Clare Oglesby who fell in love with the building in 2005, saving the, then derelict, hall from redevelopment to return it to its current splendour. It’s now firmly established as a beautiful wedding venue as well as offering rooms to stay in and a suitably appointed dining room to eat in. The food served in that room is now under the supervision of new head chef, Adam Thur. Adam has previously been a part of the “Pernshire” empire, serving in both the Harome original and the Star Inn the City. With that impressive pedigree and glowing words from a few friends, I was only too eager to head over again and see what he’s up to.

After a busy few days we were feeling a little frayed and, truth be told, a little less keen than usual to leave the house. Thankfully Goldsborough Hall is a magnificent refuge and we were quickly possessed of a great deal more calm as we sat with a drink browsing the menu, alcohol free “G&T” being a nice touch for my wife as she’s expecting our baby. The lounge was just as delightful as on previous visits with the large open fire providing the perfect backdrop for some canapés, among which slices of pork terrine with tiny romanesco and sharp piccalilli really shone.

We made our choices from the well rounded menu and were escorted through to the dining room, which pulls off a neat trick by being ornate and grand without becoming overbearing. Among the selection of breads were slices of squid ink loaf that may have been a little adventurous (I’m not convinced fishy bread will catch on) but the more conventional options were lovely to nibble at while we enjoyed a pre-starter of a deeply flavoured wild mushroom risotto served in an eggshell.

For the sake of variety, I should try and look past beef tartare on occasion, not tonight though. This example used crisped slices of bread and pickles for breadth of flavour and texture with blobs of rosehip sharpening things up nicely. Rabbit tortellini was received with equal enthusiasm, the bowl being rounded out with haricot beans and pancetta with a rich sauce tying everything together neatly.

For mains, we’d settled on spiced monkfish and mallard, though we were amused by a brief feline cameo by this point as I spotted a server quickly passing the dining room door to remove the same errant cat that I’d mistakenly let in on a previous visit! I crossed my fingers that we’d get to say hello to the cheeky mog later when we left, while our mains arrived after a well judged interval.

The monkfish was subtly spiced, not distracting from the superb fish, and served with a delightful onion bhaji and a “Mussel Mulligatawny”. Every element of the dish was superb, the bhaji remaining light and mulligatawny keeping perfect balance with the tender flesh. While I enjoyed the course hugely, I felt like there could have been one more element to really elevate it. Given that I can’t quite put my finger on what that element should be, it’d be churlish to complain. The mallard arrived arrived with brassica and delightfully unctuous sauce to pour over. I don’t recall ever eating mallard before but I certainly hope to again. As I mentioned earlier, my pregnant wife is avoiding rare meat at the moment so it was, by my request, cooked a tad further than would have let it really shine. Regardless, these were two well judged and well executed plates that we thoroughly enjoyed.

Wanting to sample as much of the menu as possible, we then moved on to desserts, dutifully getting through matcha mousse with yuzu and mango, a layered chocolate and walnut trifle and burned cream with spiced plum and doughnuts. Each member of the trio fitted the brief perfectly, and I was particularly happy with the wonderfully rich layers of varying chocolate shades and the wonderful cylinder of burned cream that contrasted nicely with the light doughnuts.

Goldsborough Hall remains a stunning location and the food continues to live up to its elevated surroundings. The building is clearly in good hands with the Oglesbys and the kitchen helps them in doing justice to the history of this building. As we left, we bumped into our furry friend again who was showing admirable fortitude in trying to sneak in. It must be said, it’s hard to blame a cat for trying to get scraps from such well developed food.

Disclaimer: No charge was made for this meal, opinions are as impartial as ever