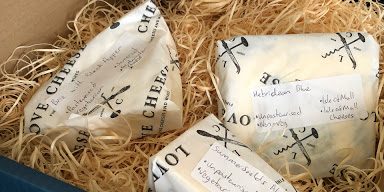 It may or may not be obvious from the theme on this site that recipe development isn’t my strong point. I can cook well enough and generally when I cook a dish for the second, third or fourth time it tends to taste the same, but I always go by feel and sight unless following someone else’s recipe. That means that I’ve generally little idea what quantities of which ingredients have gone into the pan and thus relating the experience a bit tricky. When Love Cheese contacted me recently with an invitation to participate in the Love Cheese Challenge, it sounded like a great excuse to try a few new recipes.

I received three cheese to play about with: Hebridean Blue, Summerfields Alpine and Brie with Black Pepper. As one would expect from Love Cheese, they were all superb to sample, my only frustration being that I needed to resist temptation and leave enough of each to cook with! I was eager to come up with a few ideas that, while not wilfully odd, were a little more left wing than just melting cheese onto something. While that’s generally good advice for life, I wanted to let the cheeses speak for themselves and maintain their personalities. I thought I’d have a go at one recipe per cheese, my favourite ending up being the Alpine soup so that’s the one you can consider my entry for the Love Cheese challenge!

Summerfields Alpine Soup
This cheese came from the Botton Creamery not too far from York. I’ve sampled their cheeses a few times and they’ve always been superb. This was a nutty alpine style cheese that made me think of a long lost recipe for “Alpine soup” I used to enjoy. A little research took me right back to it and gave me the approximation of a recipe to follow. I used:

In a large pan I melted the butter and softened the onion for a few minutes before adding the carrot and leek and letting them sweat for about 7 or 8 minutes (how finely you chop the veg will affect how long it needs). I then added the stock and let it come to a simmer before adding the milk and grated potato, covering it and letting it simmer for about 25 minutes. I then popped in the frozen balls of spinach and, after that had defrosted and distributed itself through the pan, added the cheese. After the cheese had melted I popped in the cream and seasoned to taste before serving with bread. As I’d made sure to use gluten free stock, this was suitable for my coeliac mother too (substituting the bread for gluten free of course!) who agreed it was delicious.

Black Pepper Brie Scones
The black pepper in this brie from Godminster cheese was thankfully not strong enough to overpower the cheese itself, as is so often the risk when adding a strong flavour to a cheese. I thought that the pepper would make a really interesting way to season some scones so looked up a few generic scone recipes and resolved to add cheese. The first batch also included a load of berries and were less successful, so I’ll refrain from sharing the pictures on here.

I mixed together the flour, sugar, baking powder and salt before massaging through the cubes of butter until I had large breadcrumb sized bits ready to add the egg and milk to. I’d combined the egg and milk prior to adding to the mixture as advised by a couple of recipes, but I’ve not had the time to check the advantage this approach adds. After mixing that lot into a dough, I added the pieces of brie and formed into patties to pop into the oven. This is what came out!

Hebridean Blue
I’ve visited the Isle of Mull and tried cheeses from there, but this is my first encounter with this blue, which impressed me greatly. I wanted to soften the flavours in this hard cheese without destroying them so I decided that a soufflé would be a good approach. While a soufflé looked like the right vehicle to convey this cheese, it’s not something I’ve attempted before or was willing to sacrifice precious cheese to practising. With that in mind, I took a pragmatic approach and used this recipe as a guide. https://fromagehomage.co.uk/2015/02/03/twice-baked-hebridean-blue-souffles/
I opted to serve the soufflés from the ramekins they took their first bake in, rather than taking them out and turning them, and was pleased with the results. In fact, there’s one left in the fridge!

I hope you’ve enjoyed my cheesy ideas for the Love Cheese challenge. I’ll be contemplating further adventures while I give that leftover soufflé its second bake.