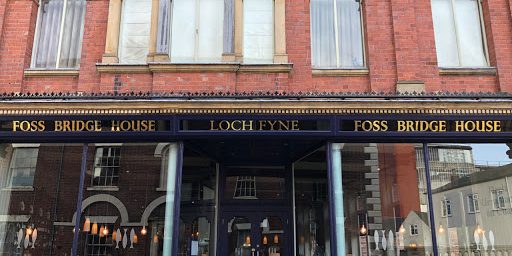 As we approach two years since the 2015 flooding, Walmgate is largely back on its feet. While there’s one notable name still showing precious few signs of reopening, the majority of the businesses are, thankfully, up and running. Amongst the worst hit businesses was Loch Fyne Walmgate, whose location adjacent to the Foss subjected it to severe flood damage. It felt like a surprising amount of time before it reopened, but thankfully the former Stubbs ironmonger building is once again open for business. Loch Fyne have a new menu coming on this week, so I was happy to accept an invitation to try it out while taking the chance to revisit the building.

Little has obviously changed in the building since its reinstatement; it’s still a striking and sympathetic use of a York landmark. There aren’t too many tables stuffed into the airy space, so it’s a relaxing place to settle, which is exactly what we did as we looked over the new menu. We plumped for a selection of smoked salmons and a scallop dish to kick things off along with a very pleasant glass of muscadet.

Our server was friendly and brisk, able to explain the menu without having to run off and check with the kitchen and very attentive, thankfully not to the point of invasiveness. The generous portion of scallops came on slices of chorizo with what was described as spicy garlic and chorizo butter. There was nothing noticeable in the way of spice, but that didn’t render the dish a disappointment in the least. The scallops were rich and not overpowered by chorizo, a good start to a meal. The selection of smoked salmons were all pleasingly distinct from one another, beetroot and gin curing being the highlights amongst the four. A pickled ribbon of cucumber provided some sharp relief while beetroot gave a splash of colour.

For mains we opted for the new “Loch Fyne Fisherman’s Stew” and the whole roasted sea bass, both new additions to the menu. To ensure minimal effort on my behalf, I asked for the sea bass to be filleted before it hit the table, maybe not best for presentation, but I’ll take the hit in return for getting it on my fork more easily. The sea bass was well seasoned and cooked along with a portion of potatoes and some aioli that didn’t see a huge amount of action as I reserved space for dessert. The potatoes I did try were able support to that fantastic fish and nicely enlivened by the aioli.

The portion of Fisherman’s stew was extremely generous and rammed full of seafood. Littered with crustaceans and pieces of fish, the tomato broth was rich and ripe to be mopped up with the accompanying bread alongside more aioli that, in truth, was redundant alongside that broth. As with the scallop starter, there wasn’t much in the way of the promised spice, but similarly it didn’t suffer for it. Looking out into a rainy York, this bowl hit its comfort food mark perfectly.

We were unwilling to hit the rainy streets, so happily lingered over desserts of creme brûlée and glazed clementine tart. The server had raved about the creme brûlée and was proved correct as a lovely example of that dish turned up. The tart was lacking the chocolate ice cream that was listed as its accompaniment, instead arriving with a strawberry sorbet.

The standard at Loch Fyne Walmgate was consistently high throughout the meal while the accompanying service was friendly and efficient. The bill came to a largely reasonable eighty pounds (excluding tip) for a three course meal for two including two glasses of wine. It’d been a few years since I’d visited Loch Fyne and I wasn’t entirely sure how high to raise my expectations, but they were exceeded frequently.

Disclaimer: No charge was made for this meal, opinions are as impartial as ever.