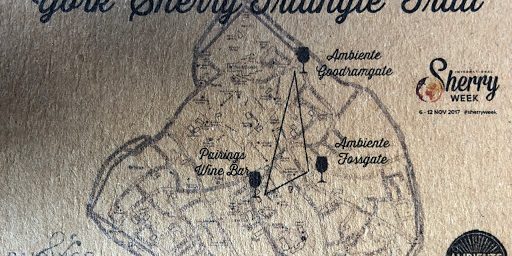 This week is National Sherry Week so to help you celebrate, Ambiente and Pairings have teamed up to offer you the chance to win a sherry hamper. To be in with a shout, you have to complete York’s own Sherry Triangle – a trip around three venues (Ambiente’s Fossgate and Goodramgate branches plus Pairings) to sample sherry and snacks. Each stop on the tour will set you back only £10 per couple for two glasses of sherry and the associated snacks. Being designed for two, I grabbed a friend and went to take a look at York’s Sherry Triangle.

We started off at the Fossgate branch of Ambiente where the staff quickly sorted us out with glasses of sherry and snacks. The food pairing was marinated anchovies served on crisp bread with a bit of rocket and a smear of garlic mayonnaise to hold the elements together. After a decent length of time chatting over our food, we made tracks for the Goodramgate branch of Ambiente.

After a short walk, we were ready for our second round. This time our Fino was accompanied by salt potatoes with octopus dusted with paprika. Ambiente has always hit the spot with its tapas and these samples were no exception. Both branches of Ambiente in York were really enjoyable, so we made tracks to finish proceedings in Pairings.

The last snack was a mini platter to share, the hard cheese pairing well with our third Fino and a chilli jam along with some pickles. Pairings was as friendly as ever as they stamped our cards ready to enter the competition. With all three stops totalling £30 for both of us, this was a cracking way to spend an afternoon, which I definitely recommend taking part in before it ends on the 19th. Fingers crossed for the competition, full details of which are here.