A trip to Northumberland 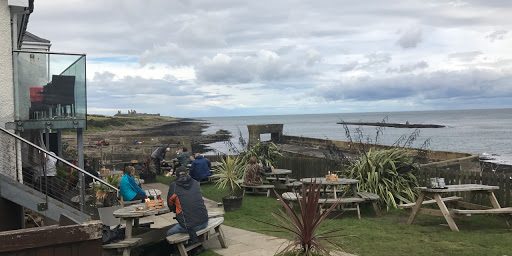 The Northumberland coast is wonderfully beautiful and hugely underestimated, in my experience, by the general public. While the Lake District, breathtaking as it is, remains consistently nose to tail on its most popular walking routes, the expanses of sand, dunes and sea in Northumberland seem always to remain underpopulated. With a YoaF baby on the way, we were after a relaxing weekend break before thea chaos began, so we looked up a cottage in Alnwick, booked some restaurants and headed North for a trip to Northumberland. Here’s a selection of the best food!

Riley’s Fish Shack
After receiving praise from Michel Roux Jr and Jay Rayner, it’s no surprise to find a healthy queue at the door of this Tynemouth legend, despite the sign warning of queues regularly exceeding half an hour thoughtfully placed at the top of the stairs descending to it.

There’s a sense of confidence in the operation here that empowers the servers to stop taking orders periodically and hold the queue to make sure that the throughput remains at a level the seating can accommodate; that confidence is an understandable emboldening based on the standard of the food.

There’s no question that this is sensational seafood at a price beyond criticism. I suppose the queue could be off-putting for some, but I thought it was a small compromise given the quality on offer. The mackerel wrap and tandoori monkfish kebab were the epitome of wonderful produce amplified by a lack of unnecessary additions. While they were stunning enough, the wood-roasted cod on puy lentil and pancetta elevated things to an even greater standard. The combination of white, smoke-touched, fish paired with earthy puy lentils and rich pancetta will remain one of the best fish dishes I’ve encountered for some time I suspect. When you take into account the fantastic sourdough and side salads too, that queue becomes no more than an opportunity to narrow down the menu to a manageable amount for a single sitting.

Alnwick Garden Treehouse
Alnwick Garden is a wonderful place to visit on a trip to Northumberland, which seems to add something new with each return, now featuring a poison garden, water sculptures, a bamboo labyrinth and a pleasingly elaborate crazy golf course. The headline food offering from the garden is the Treehouse Restaurant, a large wooden structure accessed by elevated walkways that exude personality. It’s a popular place, so we ended up with a reservation for Sunday lunch at the rather herenorthere time of half past three.

The Sunday roast menu demanded £19.95 for two courses, from which we selected a pickled vegetable salad and salmon and cod fishcakes to start to be followed by roasts of pork belly and lamb leg. The highlight of the meal came early with the salad that set pickled veg, crisp textures and pieces of beetroot to good effect. The remaining dishes ranged from average to pretty good, but it’s hard to be too critical in such a characterful building.

The Ship Inn, Low Newton
A charming pub that brews its own superb beer and serves brilliant crab sandwiches with great views. There’s really nothing more to say. An essential part of any trip to Northumberland.

The Jolly Fisherman, Craster
This was my first visit here and it’s unlikely to be the last. The crab sandwiches looked to be the match of those from the Ship Inn, but we opted for crab soup and a seafood platter. With plenty of salad and hunks of bread, the platter gave ample opportunity to enjoy the prawns, various pates, smoked salmon and herring rollmop which gave rise to discussion on who’d eaten their fair share first. The crab soup pulled off a neat trick by being comforting, warming, subtle and light all in one.

The Dirty Bottles, Alnwick
Named after a local legend attached to this building, the Dirty Bottles offers slow cooked meats, iPad ordering and a self service beer wall that all appeared popular on the Monday evening we visited. Having misjudged our appetites, we went for a sharing platter that we knew would give ample scope for a doggy bag after we’d polished off the mac’ cheese, sweetcorn and a selection of the meats, amongst which the only disappointment was a rather half-hearted cheese burger. The ribs and chicken kebabs were particularly well cooked. This was plenty of food for two at £20.