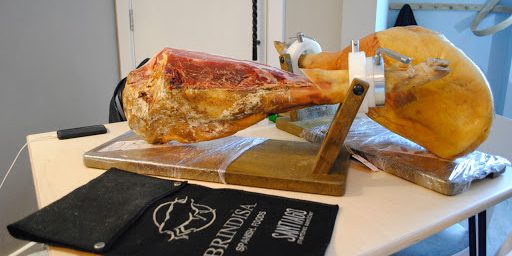 Ham & Friends hasn’t taken long to establish itself as somewhere special in Leeds, building on the enormous success of its name-shuffled forebear Friends of Ham to offer a food hall with a huge selection of cheese and wines to compliment the cured meats on sale. Throwing in a restaurant diversifies the offering even further, and there’re also courses available on related topics, such as food photography. One of the courses gives the chance to sample a range of sherries while having a go at ham carving and learning about the ham curing process.

I joined a friendly table of ham enthusiasts on a Tuesday evening to start proceedings with a glass of prosecco and meet our “Hamsmith” host from Brindisa, who spoke with enormous passion and knowledge about the meat he was working with. Through the course of the evening, we learned a great deal about the history of ham production in Spain and the traditions that have grown up around it over the last thousand years.

The Powerpoint presentation contained a huge amount of information, telling us about the protected origin status of Iberico ham, the regions that produce it, the breeds of pigs used for Spanish cured meats, the ageing process, and how to judge the quality of the meat. Incidentally, I’ve been searching my memory for another Powerpoint presentation that I’ve enjoyed even slightly, with little success.

Our “Hamsmith” friend then handed over to the venue’s resident sherry expert to talk us through the merits of sherry and how it pairs beautifully with cured meats. I’ve been lucky enough to attend a couple of sherry tastings before so needed little convincing, but those in the group less familiar with the diverse variants enjoyed a pleasant surprise as their preconceptions were challenged. Our host did a great job of talking through the journey from Fino to PX through Oloroso and Amontillado.

With the group now feeling suitably emboldened by the sampling, we set about taking a literal stab at some meat. In the manner of all experts, the chap from Brindisa made the process look easy of cutting into the cured leg to create a flat surface from which one could draw off paper thin samples of meat. There was an understandable air of trepidation about handling a very sharp knife this late in the evening from a few in the group, but practice was, thankfully, the catalyst for greater confidence, rather than alcohol, and no injuries were inflicted.

The evening rounded off with more samples of Ham & Friends’ fantastic produce and a hearty bowl of chorizo and potato stew. I had a thoroughly enjoyable evening, with great company from like-minded food lovers, enlightening talks and generous sampling of a range of superb produce. The good mood I was left in was not even tempered by having to sprint for my train! It’s definitely worth keeping a watching eye on upcoming events here.

Disclaimer: No charge was made for my attendance at this event, opinions remain as impartial as ever.