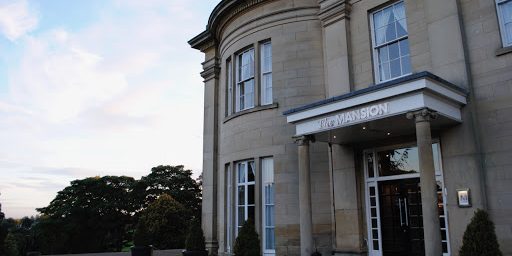 Roundhay Park is a landmark in Leeds that I’ve never had compelling reason to visit, so when I received an invitation to an ambassadors’ evening hosted by Dine Events at the Mansion in Roundhay Park, I was only too happy to go and investigate. Roundhay Park is a few miles from Leeds station, so I happily accepted a lift with a fellow attendee and, after a few debates that were won by the sat-nav, we arrived to the impressive mansion house ready for Roundhay Park dining.

The Mansion is an impressive Grade II listed building, completed in the early 1800s, that’s undergone recent refurbishment to a very high standard. After taking in the building and surroundings, we received a warm welcome as our coats were spirited away and glasses placed in our hands. That readied us for canapés which featured radish shells filled with nicely sharp goats cheese and beetroot and perfectly moist pieces of beef fillet rolled in pistachio.

After a few rounds of canapés and refills, we made our way upstairs to the grand dining room that featured a striking centrepiece on the table from Twisted Willow Floristry. It had become clear that that Dine were keen to impress and not hold back with the theatricality, starting with smoke-filled cloches and light-up trays for the canapés and continuing here with a quiz to complete as we went through the evening. The first course even appeared with LED-illuminated cloches!

Concealed by that illuminated dome was a first course of seafood that featured a oyster ravioli, scallop and monkfish accompanied by cauliflower puree and a squid ink cracker. This was a thoroughly luxurious way to start the meal, arguably throwing too many elements onto the plate, but nothing drowned anything else out and I happily polished it off ready for the, rather confusingly titled, main of “Duck not Duck”.

The duck dish had just as much going on as the starter with breast, leg and wing variously seared, confited and crisped alongside butternut squash, beetroot, potato, courgette and carrots. As with the first course, it was debatable if the dish needed this much involved, but all the elements were cooked to a good standard and the presentation hadn’t ended up nearly as crowded as one would have suspected.

The dessert course, titled “A Sweet Walk to Autumn”, put a dark chocolate tart and white chocolate mousse with a vanilla ‘creamsicle’. The generous portion of chocolate tart provided plenty of richness and, continuing the theme of the meal, indulgence while the white chocolate and vanilla gave a more delicate note before the meal was rounded our with one final flourish.

The final element of the evening returned us to that quiz with the presentation of five colourless sorbets, the flavours of which we were challenged to guess. Without anything to neutralise the palate between the bites, it was hard to distinguish with confidence between what turned out to be ginger, peach, vanilla, mushroom and mango. That’s my excuse anyway.

For my taste, there was a touch too much of the theatre about the meal and a few too many elements pushed into the dishes. That said, as this Roundhay Park dining experience with superb service and striking presentation to impress a group of people, there’s a lot to enjoy here, particularly in such a wonderful building.

Photos: The wonderful photos used in the body of this piece are from talented York photographer Olivia Brabbs, who joined us on the evening.

Disclaimer: No charge was made for my attendance. Views remain as impartial as ever.