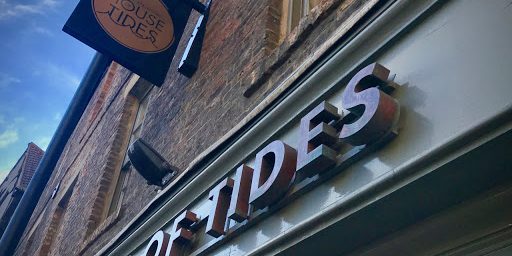 It goes without saying that I’m a complete sucker for TV cookery shows. I’ll take a look at pretty much anything from Man vs Food to Barefoot Contessa along with the primetime suspects such as Masterchef and Saturday Kitchen. Amongst all that, Great British Menu offers the chance to see some of the best chefs in the country really take the opportunity to show off and out do one another, making it tricky to get into the featured chef’s restaurants on occasion.

This year’s GBM chefs for the North East were York’s very own Josh Overington from Le Cochon Aveugle, Tommy Banks from the Black Swan at Oldstead and House of Tides head chef Danny Parker, all three of them putting on a stunning series of dishes. Tommy may have been the most successful of the trio on the show, but they all performed fantastically, making it a desperately close run contest.

When I heard that the three chefs were teaming up to put on a Great British Menu meal at each of their respective restaurants involving all of them cooking and showcasing some of those dishes, it was the decision of a moment to brace my credit card for the impact should I be lucky enough to get a table. I was indeed that lucky, so augmented that £100-a-head hit for the meal with an airbnb and train tickets to make ready for a trip north.

We arrived into Newcastle with the company of a couple of good friends, equally excited for the evening of course, and a list of pubs and food venues to check out. One of those was the Crown Posada just around the corner from HoT that was a perfect venue to compare notes for our expectations of the Great British Menu meal before taking the short stroll to our table.

We took our table, saying hi to Vicky from ‘Cochon who was on wine duty, and looked in awe at the 12 courses ahead of us as the first of them appeared. A cream cheese, onion and truffle Gougere was lighter than probable for a baked choux pastry and a perfect balance of flavours that might have threatened to overwhelm one another in lesser hands.

The plate of snacks that came up next delivered three delicate mouthfuls featuring cod’s roe, smoked eel, pork, truffle, carrot, fennel pollen and squid ink as a precursor to oyster. The three of us agreed that even as food obsessives, oysters really weren’t for us (despite years of trying) and looked jealously at the pregnant Mrs YoaF tucking into her lobster-based alternative. Regardless of one’s oyster opinions, the snacks were absolutely without fault.

Before we got into the serious business of dishes attributed to individual chefs, we enjoyed some bread and butter, the cultured butter sailing delightfully close to turning to cheese. Josh took first go at the headlining dishes with his strawberry and nasturtium dish that contrasted warm strawberry with cold nasturtium ice cream on a toasted crunchy bed reminiscent of granola. This first ‘event’ dish set the bar at a daunting level for the rest of the meal, giving Danny Parker’s “Salad 22” a challenge to compare against.

To nobody’s great surprise that was a challenge met comfortably. The idea of a salad using 22 different elements, mixing technique and ingredient, sounds uncomfortably ambitious, but we were utterly won over. The judgement shown in getting that many elements to work together no matter how your dim-witted diner shovels it into their mouth is immense, and the skill shown in selecting a wine that enhanced each, slightly varying, mouthful equally worthy of praise.

Next up to show his mettle, Tommy Banks sent out his turbot with strawberry and cream. Arguably less surprising than that labyrinth of a salad, but not showing any drop in the standard, the turbot was cooked to perfection to form the centrepiece of a delicate, fresh dish.

I suspect there’s only so much hyperbole of mine you’re interested in so, with regard to the next up, Danny was back to send out a meat course of Gloucester old spot pork with pineapple and onion that was absolutely beyond reproach. A wonderful combination of texture, flavour and presentation that continued the theme of dishes bowing to their delicate balance of tastes.

With sweet courses all that remained we welcomed, figuratively, Josh and Tommy back to our table wild herb panna cotta and “Hay time”. These rounded out a superlative series of dishes that reflected the quality of the three chefs whose standing has improved as a result of their GBM involvement. The evening was a resounding success that the whole table enjoyed without any significant criticism. With the bar set so high at every turn, my only request for next time would be a stronger hay note in Tommy’s hay dish.

In the broader context, these are three outstanding chefs hugely deserving of the plaudits thrown their way for representing our region. However, in the context of three chefs trying to outdo one another over the course of an evening, the overriding sense is one of collaboration and cohesion. If you have the opportunity to get to the subsequent events at the Black Swan or ‘Cochon then don’t hesitate to take the chance.