The Refectory at The Principal 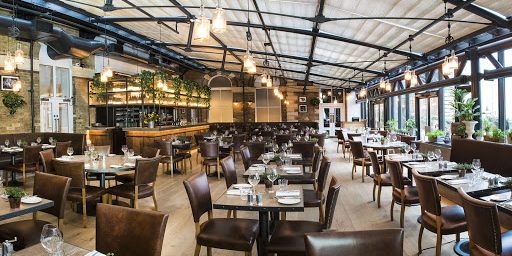 The Royal York hotel for years was a building crying out for investment. Some years ago when my city centre based employer needed meeting space outside of its own buildings we would decamp to one of three city centre hotels to use their meeting facilities. The Royal didn’t live up to its name, but after a program of investment and extensive refurbishment, it’s now a spectacular building that commands the respect its location as a railway hotel suggests. I’ve called into the bar here a few times in recent years, always finding it a relaxing place to escape a busy town centre, so made arrangements to meet a couple of friends for a drink before dinner. After catching up in a quiet anteroom by the bar, making a note to come back and play table football, we moved through to the Refectory at The Principal to be seated.

I won’t pretend that there was much debate about what to order. As is normal, I’d reviewed the Refectory at The Principal menu (at length) in advance, so it was the work of a moment to give direction to Emily, our friendly server, and settle in to wait for starters of shortrib macaroni cheese and seabass ceviche. The wine list did well to suit most pockets, starting with serviceable drinks by the glass for just over a fiver. We were even handed a list of bin end prices that were conspicuously cheap and would be worthy of further investigation.

The short rib mac’ and Swaledale cheese won the starter face-off, benefiting further when the swirl of meat was mixed through the whole dish. A crisp topping would have given a bit of crunch to round out the textures a little, but this made a good start to the meal and wasn’t as hefty as it might have sounded. The seabass ceviche was, predictably, dominated by strong citrus flavours and served on a bed of shredded vegetables dominated by greens and carrot. The fish was delightfully soft though dominated by acidity. While I’d be churlish to complain about acidity in a ceviche, I have to confess that splashing it into my eye reflected the quantity in the dish as well as my cack handedness.

The lentil & chickpea “cake” turned up on a bed of spring veg and butterbean that was reminiscent of caponata, a nice simple presentation for an unexpectedly hearty dish that didn’t need any side dishes, something we’d omitted anyway in anticipation of wanting to try dessert. The vegetable base gave plenty of flavour for the “cake” to pick up and turned into a very nice dish.

The pork came rolled in Moorland Tomme and presented on swirls of sweet potato with neatly cubed potato and a sherry based sauce. The pork was cooked to perfection with just the slightest softening of pink remaining at the centre of the fillet to temper the thick, densely flavoured sauce. With the greens on the side of the plate, this was a very strong dish that paired great flavour and neat presentation without throwing in fussiness that wouldn’t add anything.

A buttermilk pannacotta finished the meal very well, combining berries and donuts with the wobble at the middle of the plate. It’s unlikely I’ll develop a sweet tooth at this point in life, but this is exactly the kind of thing that hits the spot when the mood takes.

I hope never to have to endure another afternoon-long requirements walkthrough in a city centre hotel, but should I find myself in that position I’ll manipulate the situation to bring it to the Principal, where I can at least grab a good meal afterwards at the Refectory at The Principal by way of compensation. It’s great to see that the food and service here is deserving its place in such a spectacular building.

Disclaimer: There was no charge for this review meal. Opinions remain, as ever, impartial.