Tacos on the beach! (closed) 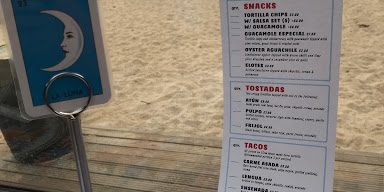 Newcastle is only an hour or so on the train from York, so my failure to visit previous to our trip based around the GBM House of Tides meal is a bit of a mystery. Thankfully some good friends came up with a few suggestions to pad out our trip, prominent amongst which was the idea of tacos overlooking an urban beach just across the water from the Baltic.

Before we headed for dinner on the day after the GBM meal, we went exploring and came across a couple of places worth checking out. Just around the corner from Ouseburn Urban Farm, you can find the Ship Inn, whose kitchen was knocking out some spectacular looking vegan food that it was a struggle not to order. One of the locals even wrote us a poem – you can’t fault the welcome here! The other recommendation we followed up was the Broad Chare where we took on a couple of snacks that suggested a return visit would be superb; deep fried monkfish cheeks being just as fantastic as they sound.

By the time we finished exploring, it was definitely time for tacos on the beach so we took a seat and a couple of menu cards in the shipping container that houses Barrio Comida. The menu here is heavily focused on tacos, with an almost obsessive approach to sourcing the best ingredients with which to fill them. There’s a sense of simplicity running through everything here, from the predominantly natural cooking fuels to the ordering cards you mark yourself and the plastic cups your wine is served in. This approach proved a perfect contrast to the previous evening’s extravagance as we relaxed into the view and ambience.

The six tacos and one tostada we ordered arrived as quickly as the kitchen could get them out, probably a touch more quickly than necessary given it was relatively quiet that evening. They were, without exception, absolutely superb. The care that goes into the sourcing paying off through every bite of each taco. Our appetite stretching to almost the entire list with only grilled ox tongue standing in our way of a full house, in retrospect £3 extra to make that claim seems like it would have been a sensible investment.

Each filling was an exercise in great judgement of flavour, quantity and heat. The standouts included fried prawn that was served with a grilled prawn head to pour over, baby potatoes in adobo with queso fresco and braised ox cheek. The octopus tostada we ordered held its head equally high, spiking capers into each mouthful alongside the fresh seafood.

The scarcely believable cost of all this when a couple of glasses of wine were thrown in and a tip added came to a shade over £40. The GBM meal at House of Tides may have been the epitome of a wonderfully memorable event meal, but this was an object lesson in how to deliver fantastic, fresh food at an incredible price.