Socialing with the Fossgate Social 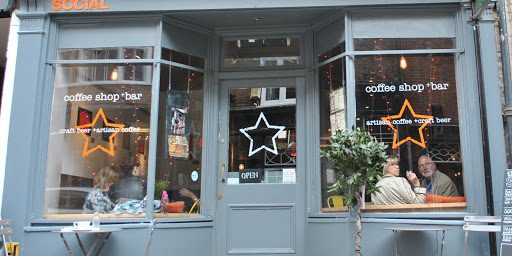 The Christmas period of 2015 was a tricky period for York to say the least. The flooding we saw was extremely dramatic with some businesses still not back on their feet, and some I suspect sadly never to return. Caught in town at just before the height of the flooding, I set about walking home only to find almost all routes cut off; my passage being saved by the sad demolition of the former Reynards garage, which created space for a shuffling queue to leave the centre. That evening at home felt surreal as the phone line went down, along with the broadband of course, the road silenced as it was flooded at both ends and Chinooks carried equipment to the flood barrier at low altitude over our house.

Slowly, though, the floodwater receded and left the scale of the clean up all too clear to see, both on an economic level, for the city’s continued well-being, and on a personal level for so many individuals, businesses and families. As is so often the case, the coming months showed up the best of people’s resilience and tenacity with many offering their neighbours help and many businesses open again in a startlingly short time.

One of the most notable examples of this spirit finds its home in the Fossgate Social. Faced with rising floodwater that had already inundated the cellar, the staff decided to shift the fridges up onto the first floor, and, having taken that step, and being faced with a not insignificant amount of work to do to get the main bar open again (achieved in only a few days), the prospect of getting that first floor ready for customers seemed less of a challenge. Being that it was all looking so “easy”, why not throw a new kitchen into the mix too?

Now that the Fossgate Social upstairs is fully open to the public and the kitchen is up and running under the stewardship of Becky Harrison, we called round for breakfast for a chat and to check out the offering. On entering, there’s little evidence of change. Perhaps the staff look like they’ve a little more space to work behind the bar now that food prep doesn’t need to be accommodated, but the flood water hasn’t washed out any character. Still hitting the sweet spot between coffee and beer, this is still one of those places where the staff won’t sneer if you order coffee after five in the afternoon or tut if you order beer before three.

Chef Becky is keen to promote healthy food and use as much locally produce, freshly prepared of course, as possible. That said, toasties and platters haven’t had the axe! Grace tucked into a ‘Valley Brunch’ consisting of scrambled egg and white bean mash that play host to portobello mushroom, cherry tomato and baby spinach. I forced myself into an ‘Eggy Stack’: French toast layered with bacon and roast cherry tomatoes.

My stack was as comforting and filling as you’d expect from this style of dish. Well-executed French toast cut through by tangy and sharp tomato while the bacon was maybe a touch crisper than my taste. Perfect to linger over with black coffee. Grace’s vegetarian breakfast received great praise, which I’ll leave for her to share below. Rather foolishly I didn’t appropriate any of the original-sounding white bean mash, any excuse to go back eh?

Fossgate is going from strength to strength at the moment: the monthly car-free Sundays now playing host to the Fossgate Festival with street food stalls, bars, dancing, music and plenty of family entertainment buzzing around. There’s a real sense of community on show here, perhaps the involvement of residents rather than just business in the planning of these monthly events lend it a more cohesive air. With businesses lending each other space to recover post flood, it’s perhaps no surprise to see different spaces being used for different things, be it closing the road once a month or screening short films, hosting music or art in the Fossgate Social new upstairs space or organising weekly fun runs (frankly ownership of a bar to return to is the only good thing I can see in that plan, but each to their own). Fossgate is on the up, and so is the Fossgate social (in the most literal sense).

Grace says: I was recommended the Fossgate Social Valley Brunch. When served, I can honesty say that I didn’t experience menu envy at the sight of my companion’s bacon.

The Valley Brunch is a portobello mushroom floating on a cloud of scrambled egg and butter bean mash. Baby spinach leaves and roasted cherry tomatoes provide colour and variety to the dish.

The handful of fresh ingredients may seem like a simple meal, but there’s enough going on to make it interesting. The sweet tomatoes and peppery spinach provided the strongest flavours, with the mushroom and mash made it a meal. The butter bean and scrambled egg mash is far lighter than the expected mashed potato, and tastes wonderful.

The most satisfying thing about the Valley Brunch is that it doesn’t leave you thinking that it could have benefited from adding bacon or chicken. Overall, it’s a meal which is delightfully confusing. The fried mushroom hails from a cooked breakfast, while the tomato and spinach is salad. It’s all very nutritious and hits the spot. In short, the Valley Brunch is a hot salad which fills you up. Try one for yourself.