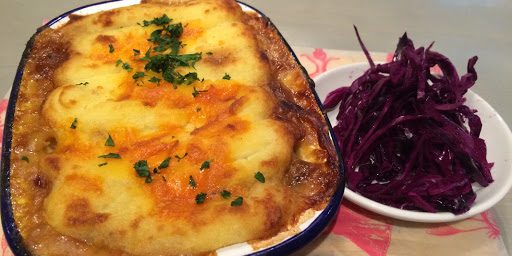 Stuck in that middle territory between an independent trying to establish a brand and a increasingly ubiquitous chain, Bills York is in an awkward spot in the market. Fluffy rhetoric abounds on the website about the businesses origins and touches such as fruit sitting outside the premises could be misinterpreted as cynical marketing from a company with enough money to play those cards but a slow departure from its roots.

I checked out breakfast there a little while ago and was pretty impressed but only finally got back yesterday to try the lunch menu. Improbably perky servers had us seated in a jiffy and almost bisected by menus in their enthusiasm as we started to choose some dishes. My dining companion went for a middle of the road burger while I plumped for the duck pie only to be warned of an oddly specific 18 minute wait for the duck pie and directed toward ordering something to stave off our hunger pangs so went for some mixed marinated olives. The olives may have felt a touch more purpose in life if they’d arrived in time to fulfil their stated aim rather than a couple of minutes before the mains. Perhaps they were chilling in the kitchen with the offered jug of water that never appeared.

The burger was largely unremarkable. Slightly inconsistently cooked with a few pink spats across it’s section but offered of good ingredients, paired with well presented chips it was a pretty serviceable dish. My duck pie was topped with mashed potato and packed with pearl barley that leant a slightly gelatinous presence. Chunks of duck breast were generously in quantity but the dish lacked subtlety. Sprigs of thyme were unwelcome and required extrication from my mouth on a couple of occasions but largely a decently hearty meal. Braised red cabbage was an acceptably sharp accompaniment.

We were only going for a quick single course lunch so maybe didn’t give too much of a chance to shine, but one can only base judgement on what’s presented. Surely half the point of a relaxed spot like Bills York is an ability to cater for multi course blow outs as well as a rushed but decent lunch? I might have come across a little negative so far but in reality everything was entirely acceptable… just a bit too expensive. A course each, a small bowl of olives and a small glass of wine each topped £20 a head. When we’re into that bracket there’re plenty of other options I’d recommend first.