Can you just stick that on the Bill? 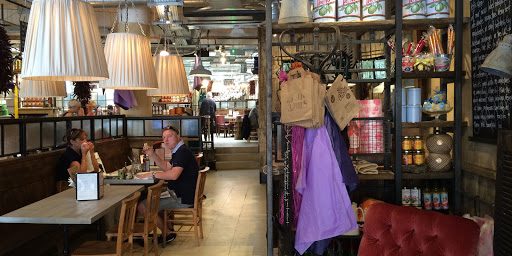 The newest entrant to York’s rather competitive breakfast market has plonked itself right into the middle of Coney Street and shouted its presence with lots of twinkly lights highlighting a neatly renovated frontage. Bill’s has been advertising its upcoming appearance for a little while and I’ve heard several excellent reports so it was clearly time to take a peek.

Those friends’ recommendations still made me a bit nervous since I accepted a recommendation to try Nandos from some people whose opinions I otherwise trust implicitly, so it was with expectations kept in check that I arrived with three suitably qualified/hungry companions to be quickly seated in the surprisingly large space. It’s clear that there’re no half measures in this newly fitted out place, everything either immaculately positioned or artfully contrasting the neighbouring piece of furniture.

Luckily with four of us, there was the chance to try several different things from the menu: porridge, egg royale, vegetarian breakfast and ‘Bill’s Breakfast’ all were requested along with coffee and water. First signs were decent despite, as with many other establishments habits, the request for some tap water seemingly remaining subject to selective amnesia.

Food arrived promptly and hit the spot for all concerned. My Bill’s Breakfast was perched on sourdough and had superbly fresh mushrooms, black pudding and sausage sheltering under bacon and fried egg. The egg could have done with being less well cooked and the accompanying beans were covered by a bit of skin that suggested they’d been waiting for my presence for a little time, but all the good quality ingredients made their presence felt. The vegetarian breakfast was nicely original, the same sourdough as ‘Bills’ soaking up guacamole, houmous, tomato and poached egg. Well-timed egg poaching also formed the basis of the egg royale while that dish and the banana-topped porridge made the recipients sigh with satisfaction at the close.

All good then. I suppose the only point of concern is that York has some great choices for breakfast. Cafe No. 8 and the Perky Peacock on Gillygate and the Brew and Brownie, amongst others, are local businesses that offer good value and I still feel a loyalty to them on the basis of locality. I’ve no doubt that Bill’s will crop up on the breakfast rota at some point in the not too distant future but, without entering into the local/national complaints I made about Byron, you’ll undoubtedly enjoy breakfast here and I’d heartily encourage you to give it a go. I’ll pop back and try out the dinner menu sometime soon.

One noteworthy way to gouge a touch more money was the paper bag deposited on every table containing a pencil to tick boxes on its bag that signified which takeout bits you’d like, a little over the top and felt a bit cynical though I’m sure the marketeers would suggest it’s nothing more than a pressure-free opportunity to try a bit more of Bill’s magic.

Bill’s is a great addition to Coney Street that breaks up the monotony of chain stores and the occasional bar. Give it a go and I’ll see you there for dinner soon.