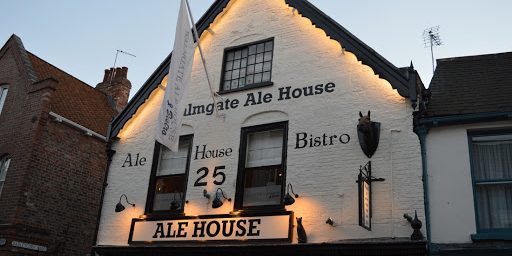 Great news! A popular name on York’s restaurant scene has disappeared! Melton’s Too is no more. Fear not though, I’ve not executed a sudden 180 degree turn in my support of the local food scene – the name may be gone but the building, ethos and execution are still very much in evidence with the opening of Walmgate Ale House.

Meltons Too has been a mainstay of the food scene that’s made its home on Fossgate and Walmgate over the last decade, opening at roughly the same time as I made my home in York. In those distant days, I recall an offer on half price tapas when bought with wine on a Friday that made for a spectacularly good-value post-work treat. Since then, I’ve seen it as a reliable place to grab a sensibly-priced meal, in particular when having left myself without a reservation at a weekend. Perhaps that name has become too much of a burden though.

It’s not uncommon to hear people make reference to ‘proper’ Meltons or ‘the other’ Meltons when differentiating between the two establishments. Given that they’re representing quite different experiences, it doesn’t reflect fairly on either place to be referred to in such faintly negative terms, so the Hjort’s have taken the decision to rebrand Meltons Too as the Walmgate Ale House and more sharply delineate the two.

The internal changes are effective rather than overstated. The front bar area has been rejigged to nudge it away from a dining area and provide a space for a quiet drink, something actually Meltons Too was always happy to provide. In fact one friend was particularly dismayed to learn about the plans for a more drink-focussed area (“where the bloody hell am I meant to go for a quiet drink on Walmgate now?”). The food focus might be higher in altitude but there’re superb snacks available in the bar that, uniquely in York to the best of my knowledge, are produced on site. Pigs in blankets, sausage rolls and scotch eggs go very well with the selection of beers served in dimpled glasses

Upstairs the bistro area remains largely untouched other than the addition of more comfortable chairs. The old plastic ones were not a highlight, so that’s a clear improvement, but larger changes are reserved for the loft which has been redecorated and should now be a favourite setting for Christmas parties.

The menu in the bistro wasn’t crying out for a overhaul, so hasn’t had anything dramatic happen to it. I’ll pop back to check it out soon.