Reflections on a year of Family Fork 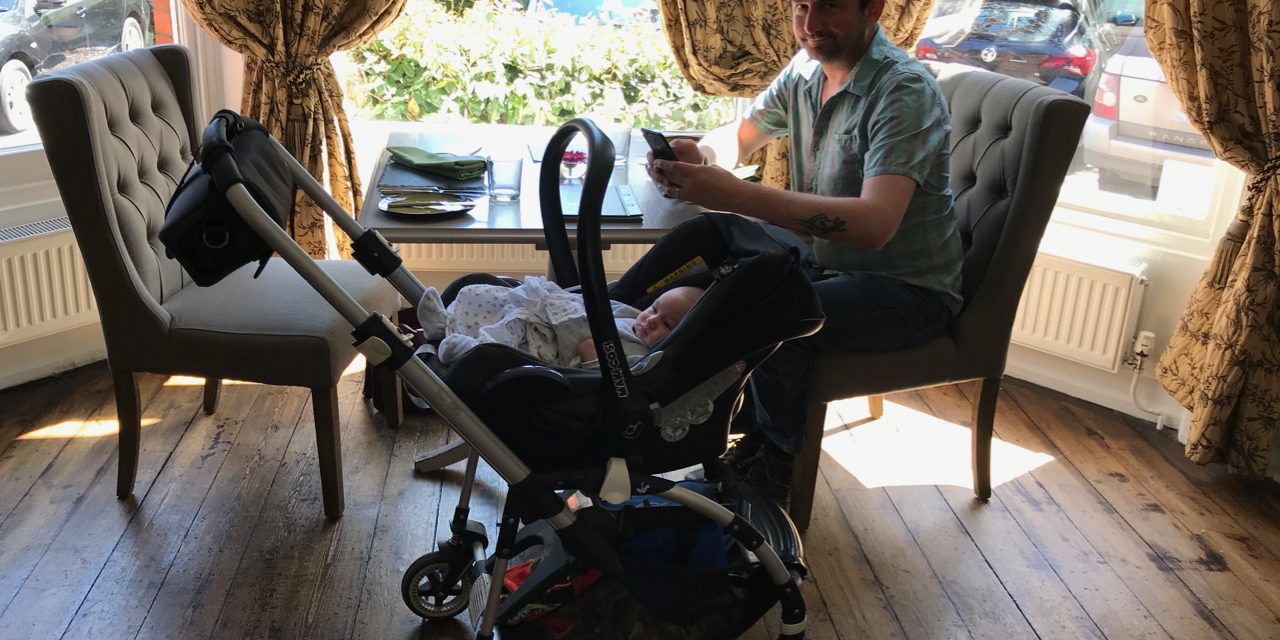 It’s a curious contradiction that busy periods in one’s life seem to fly by when viewed in retrospect but also subject you to seemingly interminable periods of slow motion when dealing with the the more trying events. This is something that’s come into my mind repeatedly while considering the first year of parenthood and reflecting on the journey that so many take but remains so varied and personal in its impact and experience. I thought I’d take a bit of time now to consider what the first year has meant to me and where it leaves Family Fork now. Childbirth, becoming a parent and everything surrounding that leads to a huge change in one’s life that deserves as much support as possible. I hope some of the experiences shared here can give a little context and assurance if you’re getting ready to have your life changed.

The build up
We were determined to avoid overpopulating our house with garish plastic contraptions of debatable merit in the run up to the becoming Family Fork, the only issue with this approach being a continual nagging feeling that you might have missed something. The gaps in our approach were happily filled by more experienced mothers-in-law, preempting our need for changing mats, play mats, bath seats and so on. As we attained the closest state to readiness we could, we found the last couple of days before our booked induction entered us into a strange state of suspense. We were reduced to anxious waiting and grazing around some of our favourite food stalls before trying to get some sleep while we wondered what the following day would bring. One thing I did in preparation was cook a huge amount of food, forty portions if I recall, to freeze. Key learning from that one is to vary it, you can get very bored of three things very quickly.

Birth
When we were filling out the Family Fork birth plan, I remember seeing the question “What would you like to happen in the hour after the birth” and wondering what the appropriate response would be. Nip out for a pint? Grab a bite to eat to refuel? Catch up on an hour’s sleep? Sneaky bit of video gaming? It felt like a bit of a nonsense to try and presuppose what we’d feel at that time, given our lack of experience, but we went through the process anyway and made sure we had our overnight bag packed nice and early. As Mrs Fork is a geriatric mother (ie over 35, I’m not just calling her names) we were booked in for induction a couple of days after the due date, for which we arrived on time and I think inadvertently resulted in another couple being sent home to come again. Many apologies if that was you.

The wipe clean nature of fabrics used in hospitals made furniture in the induction suite impossibly noisy to sit on unless utterly still, so the 15 or so hours we spent in there didn’t mesh well with the elements of anxiety and sleep deprivation we’d already managed to bring to the party. We were grateful when things picked up pace and we could change up a gear to the delivery suite.

Mrs Fork’s approach to pain management was to take as many (prescribed) drugs as possible so an epidural was quickly installed and fired into action only for a relatively common complication to take place and her blood pressure drop dramatically, instantly dropping Foetus Fork’s heart rate by around 100bpm to 30bpm. It must be said that this was a particularly traumatising 60 seconds while a flotilla of medical professionals shoved a litre of fluid in a minute through the second canula that I facilitated the introduction of into my wife’s outstretched hand. Mrs Fork recounts being spookily calm at this point. I was not. Still, at least the epidural had been 100% successful on 50% of her body, so some pain management was in place. Things progressed smoothly from there and by 2am we’d met our waxy, gunky and adorable daughter. The wonderful midwife who helped us through the experience had by now figured out that I was happy to be involved as much as was practical and had me passing equipment, helping her gown up and steadying lights to help her through procedures. Never has the jargon picked up from too much time watching ER been so useful!

All this was taking place in February 2018, which you may recall was the time of an usual cold snap christened “The Beast From the East”. This meant that to get Baby Fork’s first set of clothes up to an acceptable temperature, I had to pull off walking around the delivery suite with them stuffed up my T shirt for half an hour while not looking like I was impersonating a pregnant woman. Not the best look in a labour ward! Another tip, and fairly obvious suggestion in retrospect, is to take a variety of snacks for both mum and dad. 12 hours subsisting on Tunnocks caramel bars wasn’t great. As far as food goes, while every meal served on the ward was almost enough to ensure further hospitalisation, the food served from the onsite restaurant (Ellerbys) was surprisingly good.

The early weeks
Once discharged and home, the real journey began. As a first time parent, it’s bound to be intimidating to be charged with the care of a newborn regardless of the midwife safety net on offer. It’s a peculiar combination of extreme sleep deprivation, tremendous amounts of new responsibility and the need to learn an awful lot all at once. We were lucky enough both to have made some good friends through NCT and have a couple of other friends also in the same position. That made an enormous difference and the WhatsApp groups were kept busy through many long nights. The huge majority of people I’ve spoken to since then have admitted just how challenging those first few weeks are. In retrospect, we feel like we coped ok and managed to make it out of the house regularly, but there’s little to compare to the tiredness that it’s normal to experience. Mrs Fork even found herself unable to figure out why the back door wasn’t shutting one day… turned out there was a cat trapped in it, thankfully uninjured and ready to be a lovable nuisance another day.

Back to work
Visitors to our house frequently comment on how there’s still a sense of order to the place and that adult feeling spaces can quickly be achieved. This is something that I’m quite proud of, but it’s constantly on a knife edge as it’s achieved by tackling every task the moment it becomes necessary. I’ve established that breaking that pattern for just 30 minutes or so starts things snowballing and domesticity quickly becoming overwhelmingly disorganised. This has become even more of a task since Mrs Fork (as the main wage earner) returned to work, compressing full time hours into four days. Nursery fees quickly add up, so we’ve settled into a fragmented but effective routine involving nursery, grandmothers and parents. The particular focus of each day inevitably moves to the evening, ensuring that I’ve got food ready to go as quickly as possible on Mrs Fork’s return to facilitate bath time and bed time in as timely a manner as possible so that we have at least a few minutes to ourselves.

Feeding and eating
Breastfeeding is such an emotive and nuanced subject, but it’s impossible to ignore in the context of this piece. Yes there’re clear, evidenced benefits for mother and baby, but it can be a terribly hard thing to do without proper support or even with the best-intentioned support. A few months before Baby Fork’s arrival, I offhandedly said to a midwife that I would get some formula in to make sure we had the option and was firmly told that I mustn’t do that as it would lead to us “taking the easy option”. Fast forward to the morning after Baby Fork’s homecoming and she was inconsolable so I asked the midwife to come sooner rather than later. Thankfully she was able to do so and quickly established that our baby had lost nearly 14% of her body weight, requiring urgent feeding before readmittance to hospital for a feeding tube. Having heeded the previous midwife’s unambiguous advice not to buy any formula, I was left to run to the local supermarket and buy some along with the bottles needed to offer it to baby. A short while later, we were back on a ward with a nasal tube fitted to our sad looking child and we were back home the following day with a clear plan of action. I’ve no desire to weigh into the breastfeeding debate, but I will say that such absolute instructions as we were given don’t serve anyone well. Neither does making new mothers feel guilty for their choices.

Where are we now?
How can it possibly be a year since all that took place? Life without our little wriggling cutey seems unimaginable. We’re getting a fairly sensible amount of sleep these days and have settled into a routine that, while occasionally tiring, seems to meet the majority of Family Fork needs. Free time is at a premium but reciprocal babysitting arrangements with friends have allowed us to make sure we continue having something of a social life. This first year has certainly had its tough moments, those first months in particular being testing, but we feel incredibly lucky to be parents to such a good natured, healthy child who enriches every day.

Family Fork has found a range of brilliant support networks in York over the last year and made some lovely friends while being lucky enough to enjoy a large part of maternity leave together. We’ve found welcoming places for coffee and brunching, both old and new, and been welcomed to all manner of eating and drinking establishments. It goes without saying that I love York and I’m really excited about the prospect of bringing up a child here and finding new corners of our city.

The coming years are bound to be full of more demanding challenges for Family Fork but the key thing we’ve taken from the last 12 months is that whatever unknown challenges are coming, as long as we do it together and with good humour we can rise to the challenge.