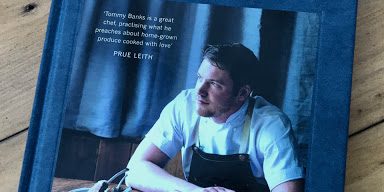 The last couple of years have been quite something for the Banks family and the Black Swan at Oldstead. Tommy Banks has made his mark with two years of success on Great British Menu while the accolades have continued to flow for the restaurant in Oldstead, including being named the world’s best restaurant in a list compiled by Tripadvisor. With hospitality being such a competitive business, Tommy has continued to capitalise on this momentum with the launch of a recipe book and the announcement of a second restaurant to open right here in York later this year. Both of these are titled “Roots” to reflect the Banks family’s strong belief in seasonality and locally sourced ingredients. It goes without saying that I’m eager to check out the new restaurant when it opens, but in the meantime I’ve been taking a look at new recipe book Roots from Tommy Banks.

The book is arranged around seasonality, though rather strikingly Tommy makes the bold decision to redefine the seasons along the lines of how they work at the Black Swan. Rather than the more usual quartet, Tommy highlights just three that he calls the “Hunger Gap”, “Time of Abundance” and the “Preserving Season”. The first of these runs roughly January to June, during which one might more heavily rely on preserved ingredients. June to September follows, taking in the opportunity to source plenty of fresh produce, and the preserving season from September through to the end of the year gives up plenty of root veg and chances to get into preserving techniques ready to start again.

Roots from Tommy Banks includes a good breadth of dishes and techniques, many of which are referenced as elements in more complex dishes. A lot of the elements are deceptively simple and flexible, the “Notes and Staples” section talks through a range of brines, stocks, sauces and purees that can be easily replicated in a home kitchen for a range of dishes. If you’re feeling more ambitious then the book also runs through much more complex plates such as the Black Swan’s famous Crapaudine Beetroot. For my first cook, I chose the Braised Ox Cheek with Cauliflower and Kale, which was rated a “1” for difficulty out of a maximum score of “3”. I’ve braised ox cheeks plenty of times before so was curious to see how much extra flavour Tommy’s recipe would give an already luxuriant dish.

The first steps are simple enough, colouring and searing the cheeks before deglazing the pan and covering the meat and chopped vegetables with braising liquid before popping in the oven for a few hours, giving the perfect opportunity to nip to the pub. The cauliflower elements represented more of a challenge, the first requiring relatively precise chopping, blanching, refreshing and cooking in butter for one element while the other required more chopping along with frying before pureeing. To finish the dish, all that was left was to boil, blanch, drain, press and deep fry some kale leaves. To complete the plate took around seven hours (including the lengthy braise and trip to the pub) and was a great illustration of the effort that can go into constructing the sort of food you expect from a good restaurant. Of course, cooking in a domestic setting meant that I wasn’t taking advantage of any of the economies of scale one would expect in a professional kitchen, but the variety of process and number of steps required to get to the final product was pretty hefty. That said, everything was perfectly achievable in my average kitchen and the superb food I’d produced reflected the effort that had gone into it. I’m not one to slavishly follow a recipe, so it’s unlikely I’ll do exactly the same dish again, but I’ll certainly revisit elements, in particular the braising technique and cauliflower elements. When presenting the dish, I was able to take advantage of happy circumstance to plate up as Jane the Potter, who supplies the Black Swan, has her studio nearby so I could use the same plate! Tommy featured my finished recipe in his social media a while later so I guess I did something right!

To try out a simpler recipe, I picked out a dish that was a bit more seasonal and gave me something to do with a glut of wild garlic. Wild garlic pesto limited its ingredients to just five elements and required me to just toast some hazelnuts before combining with the remaining garlic leaves, oil, cheese and salt. The end result was less wet many pestos but no less delicious for it. I coated some chicken breasts in it and cooked them in a water bath before reducing the juices to make a sauce, while it also made a great fall back for an easy meal over the following few days.

Roots from Tommy Banks is a beautifully produced book that highlights the effort that goes into making superb plates of food, allowing the reader to replicate the dishes at home, should they choose, or pick and choose elements. It’s been compelling following the Banks family story for the last few years and this book makes a fitting companion as a new chapter begins with the upcoming launch of the book’s namesake restaurant in York.

If you like the sound of all that, here’s a recipe from the book to have a go at:

Pour the cream into a large saucepan and add the shallot, garlic, spices and bay leaves. Bring the pan just to the boil, cover with clingfilm and set aside to infuse for 30 minutes before straining through a fine sieve.

Preheat the oven to 180°C/350°F/Gas mark 4. Slice the celeriac and potatoes into pieces 3mm thick.

Pour enough of the cream into the bottom of a 30 x 20cm ovenproof dish to cover it in a very thin layer. Add a layer of celeriac slices, arranged in rows like fish scales so each slice neatly overlaps the last by about 5mm. Drizzle over a few spoonfuls of the cream and season lightly with salt, then build a layer of potato slices in the same way as the celeriac. Repeat this alternate layering with the vegetables and cream until you reach the top of the dish, stopping every couple of layers to give the whole thing a good press down. Pour any leftover cream over the top, give it a final press and bake for 20 minutes covered in tin foil. Then remove the foil and return to the oven for a further 25 minutes, or until a knife goes through the layers easily and the top is golden brown.

Baked celeriac is delicious and this is a brilliant way to complement the fragrant celery flavour of the root with spices. A gratin can be a meal in itself with some nicely dressed kale leaves, or a wholesome side dish to a roast dinner.