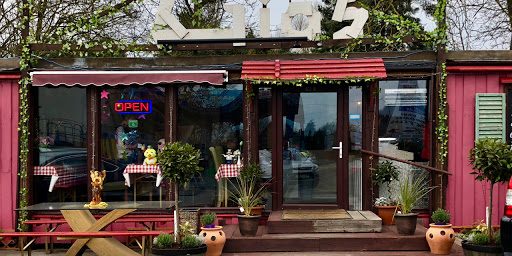 When dining out, there are few things as worrying as a menu featuring page upon page of choices thrust upon you. Worse still when those pages feature hugely disparate specialisms that reflect different cultures and techniques. Of course there are many wonderfully talented chefs capably injecting variety and choice into their menus across the country, but these are rarely found knocking out two meals for a tenner in cavernous ring road pubs. At the other extreme of this spectrum sits people specialising in one thing done as well as possible. This was what I found at the rather unassuming Gio’s Italian Diner.

I’ve had a few people suggest popping along to Gio’s Italian Diner and it’s on a regular route I travel, so I’ve been noting it’s progress for some time. During this period it’s formed itself into something of a landmark on the Hull Road, making the most of its modest surroundings that, perhaps unpromisingly, features a hand car wash. The actual restaurant is based in a repurposed shipping container that feels anything but as utilitarian as that might suggest. Diners were welcomed by the friendly owner behind his strikingly large machine for producing thin dough. Around the same time as I got there, another party arrived with a couple of kids who were quickly issued with chunks of dough for them to form into whatever shapes they saw fit ready to bake and take home; a really nice touch that set the friendly and informal tone.

The one thing that Gio’s Italian Diner has chosen to specialise in is Calzone, which unsurprisingly dominates the menu. A four inch calzone will set you back up to six pounds while doubling the size means you’ll have to dig out up to another three quid. Alternatively a set menu including antipasti, a four inch calzone and some ice cream will run up a bill of £11.95 a person.

We made ourselves comfortable at a corner table while we ordered and settled Baby Fork into a space and got stuck into the antipasti and a few slices of cheesy garlic bread. It’s worth reinforcing at this point that this is very much street food style, so if you’re put off by cardboard trays and disposable (biodegradable) cutlery then maybe give this one a miss. I’ll happily eat anywhere the food measures up and what’s on offer here is certainly worth a detour. The antipasti we started with was a simple selection of marinated veg including mushroom, cauliflower, sweet potato and olives along with a few slices of chorizo and that cheesy garlic bread. Everything we ate was simple enough stuff but judged well and balanced nicely, a theme that was to continue.

Our party of three had all gone for the four inch option, variously selecting the pepperoni, cheese and ham and a special of a wagyu beef brisket with bbq sauce, garnished with some sharp pickled veg. We may have all been eating variations on the same dish, but nobody was disappointed. The Gio’s calzone is the epitome of a well-delivered dish from a chef that has focussed on making one thing as good as he’s able to. In my experience, calzone has always been a doughy, weighty disappointment focussed on size rather than quality but the surprisingly light parcels we enjoyed were a world away from that stereotype. In particular, the beef in mine was delightfully tender and sat happily in the taste of barbecue sauce it needed to make the dish while the pickled veg didn’t outstay their welcome. When relying on doing one dish well, every element needs to hit its mark perfectly and the final remaining element of the dough reached the same heights. Thankfully it was beautifully light and didn’t descend into starchy lumps as can be the case, it (both figuratively and literally) wrapped up a delightful course for us all.

To finish, we shared a series of ice cream scoops featuring a range of flavours including a delicious creme caramel that I’m afraid I may have dominated. By this point Baby Fork was due a change which in doing so exposed a weakness as I didn’t find a suitable baby changing area. Thankfully the nice weather made the back seat of the car an easy substitute.

Gio’s is a friendly, welcoming and characterful spot that achieves its goals admirably in delivering a superb signature dish at a great price without compromising on quality. With a reputation spreading rapidly, it’s worth planning a visit in the near future to check it out for yourself.