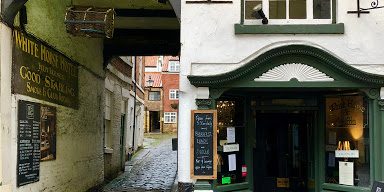 Yorkshire has a bit of a reputation for its climate. Every time I have a visit from a more southerly based friend, I inevitably have to endure a couple of poor jokes about it being “cold this far up” and so on. Winter in Whitby produces a more extreme example of this, with the wind bringing even more chill as it comes in over the North Sea. I may not be selling the place very well so far, but the flip side to this cold is that the streets in Whitby at this time of year are relatively quiet and the satisfaction one can derive from an open fire is proportionally increased.

The White Horse & Griffin is a hotel centrally located in Whitby that dates back as far as 1681, since when it’s enjoyed a storied and eventful existence that’s even included use by Captain Cook and William Scoresby. After this initial burst of historic significance, the hotel closed in 1939 before settling into rather more ignominious use post-war when it was mainly used to store fishing nets and equipment. In 1982 the building was given the beginnings of a restoration and extension that continued until its opening 11 years later. Since then it’s continued to find its place as a characterful and comfortable bolthole right in the middle of town.

The entrance and small bar one is confronted by on arrival belies the rather labyrinthine nature of the building that twists its way past dining and relaxing spaces through to the bedrooms. Notably there’s a separate guests’ entrance away from the street to allow access without having to make your way through the public bar. The building is absolutely packed with characterful touches, open fires, exposed beams and low ceilings being littered throughout. We stayed in a room named “Wakeful” (after a British Naval Destroyer) that had a small anteroom with TV which was separated from the corridor. The bedroom itself had all the facilities you’d expect with tea making, TV and wifi all present and correct and the ensuite was basic but clean and functional. Having found a sense of our lodgings, I left Mrs YoaF for her afternoon rest (8 months of pregnancy having taken its toll) and headed out for a walk to see winter in Whitby.

First port of call was the Green Dragon Bottle Shop, which is in the process of setting up a tap room to give space to enjoy its vast range of carefully sourced beers. The tap room looks tantalisingly close to opening, so I just had to settle for a chat with one of the owners to reassure me that the passion for beer was reflected in the range available. This has all the makings of a great place to sit and try some unusual beers.

Next port of call was Whitby Brewery tap room, necessitating a climb of those famous 199 steps which have been a landmark for around five hundred years. The tap room is tiny enough to encourage conversation between all its inhabitants at once, including the four legged and enthusiastic type. Its position at the top of those steps ensures that everyone who arrives will be desperate for a pint of Whitby Abbey Blond, and fortunately it’s an entirely appropriate pint to recover with.

Having reacquainted myself with winter in Whitby through my strolling (including passing The Star Inn The Harbour, review to follow of course), I made my way back to the White Horse & Griffin for dinner, dodging the monstrously proportioned local seagulls who’re clearly well fed with leftover fish and chips. The Endeavour lounge is a quiet and warm space with a large open fire that’s separated from the main bar, best suited to residents in my view, and offers space for drinks and menu consideration before dinner. Also on offer are a range of board games, prompting conversation with a couple of other residents who were clearly enjoying themselves! After a short delay we were on our way to the snug, low ceilinged dining room, with another open fire keeping the January air at bay.

Having spent a good amount of time with the menu already we didn’t need the pause offered by bread and butter to place our order so quickly got on with ordering, making sure to include the chef’s suggestions. We agreed to start with pig cheeks and scallop dishes. After another pause the starters presented themselves smartly, with the scallop making the best entrance in terms of plating. Pea puree and squid ink crisps sat in the shell with the scallop while morels blended into the slate on which it was served. Pigs cheeks came with piped on truffled mash, apple puree and an “apple caramel”, all of which filled out the plate nicely. Pigs cheeks remain a sadly underappreciated cut of meat and the classic pairing with apple worked as nicely as one would expect, the “caramel” feeling more like an indulgent sprig of crackling to give texture.

By some margin I thought the most intriguing thing on the menu was a beef cheek and haggis pithivier so that was an obvious choice alongside a bouillabaisse to make sure we were taking advantage of the local seafood. The pithivier lived up to its star billing comfortably, with the pastry remaining light to give background against which the haggis accented beef cheek could shine. Shaved truffle was maybe an embellishment that the vegetables didn’t need but the plate really was well balanced and lived up to the recommendation. The bouillabaisse on the other side of the table earned similar praise with its generous mix of white fish and shellfish under a suitably rich sauce. Dessert came in the form of a chocolate coffee mousse that, while not hitting the heights of the mains, did a good job of finishing things off. We retired for the evening happy that we’d seen the best from the restaurant.

Breakfast the following day found us back in the restaurant, noting the neat slide out toast runners on our table to give a smidge more space. We had to show a bit of restraint to make sure we could eat at the Star Inn the Harbour a few hours later but the smoked haddock and eggs Benedict would have comfortably seen us through the majority of the day.

I really enjoyed staying at the WH&G, it was a great base for winter in Whitby. It would definitely benefit from a few rough edges being smoothed off in terms of painting and detail but the price is absolutely right given the location, character and lovely public spaces. The room rate we stayed in will come to about £120, including breakfast, and dinner was another £75 per couple depending on how generous a tipper you are, both very reasonable numbers for the location and character on offer. When we left the following morning we’d warmed up enough to allow us a stroll to the edge of the harbour before needing to find further respite from the cold. I’ve not spent enough time in Whitby in the last few years, but I’m thoroughly bought round to the idea of a winter break here. Even if you’re staying somewhere else to shelter from the cold, the food here is well worth a visit in itself.

Disclaimer: My stay and dinner were complimentary for the purposes of review