The Star Inn the Harbour 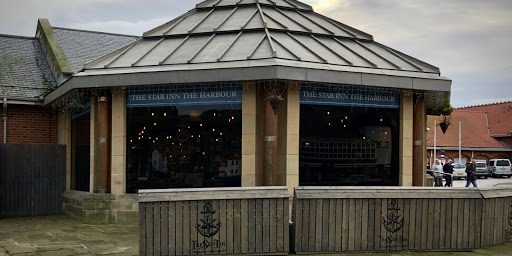 I’ve a confession to make. I’ve never really felt like fish and chips deserve their iconic status across the UK. Yes of course there are great examples, but the overwhelming majority are greasy bludgeons of batter that rest under hot lamps for too long before being wrapped in paper to gently steam the partnering chips to mush on the journey home. The portion sizes usually stray into the food waste zone and the amount of time spent digesting is usually much greater than the length of enjoyment derived from the meal. That aside, Whitby hosts some well reputed options for seafood such as the Magpie Quayside and when Andrew Pern set up shop in Whitby last year, opening The Star Inn the Harbour in the former tourist information centre, it was pretty certain that it wouldn’t be a run of the mill fish n’ chip vendor.

Since striking out from his Harome-based mothership, Mr P has grown his “Pernshire” collection to include the urban Star Inn the City and Mr P’s Curious Tavern in York, but this most recent effort finds him moving back toward the countryside and his home town. The Star Inn the Harbour feels like a landmark development in Whitby which throws in an ice cream parlour along with the restaurant for added popular appeal.

The menu offers the obvious dishes to please those who descend on Whitby for the ubiquitous fish n’ chips, but when I arrived for a Saturday lunch I’d determined to run through the more intriguing notes on the menu. It goes without saying that Whitby in January is freezing cold so the welcome as we arrived was always going to be an open goal. Thankfully that goal was taken with enthusiasm as we made our way through the ice cream parlour to the restaurant. The interior of the building is kitted out by typical Pern zealousness with lobster pots, ropes and plenty of appropriately themed art and sculptures dotted about to break up the large, airy space that benefits from plenty of glass meeting the outside world. The glass expanse by which we sat let through appreciably more light than we’d guessed from scouting the exterior of the building when we’d noticed how tinted it seemed. The tinted glass afforded great people-watching opportunities as we dissected the menu and noticed how many people outside were surreptitiously sneaking chips to their dogs behind their partner’s backs.

As with much of the Star empire, there’s a lot going on with the menu. The Harbour offers plenty of meat dishes to complement the prominent seafood theme, though it must be said there could be more in the way of vegetarian options. To start with we went for calamari with squid ink aioli, also grabbing the chance to enjoy a lobster bisque from the specials menu. The preceding 24 hours had involved a sizeable amount of eating so the bread stayed pretty much unmolested, save for enough sampling to confirm it was up to standard. As we waited for starters we noted how spacious and accessible the building was, offering plenty of opportunity to stow pushchairs and step free access. When the starters were delivered after a suitable pause, we found the calamari thankfully not overcooked as is so often the case. The tower of calamari rings found a great home when dredged through the squid ink aioli, given just a hint of the ocean by the squid ink, which also lends its dramatic colour. The lobster bisque was absolutely outstanding, one of the best starters I can recall for some time. Inhabited by a generous amount of poached lobster meat, the flavour and seasoning of the bisque was utterly beyond criticism and only further enhanced by the saffron-infused cracker balanced across the plate. The punchy pickled fennel elevated the experience even more, making this a really memorable start to the meal.

To make sure we really got into the menu, we were then treated to a second starter of smoked and cured halibut that was served with samphire and egg mayonnaise along with capers and finely sliced shallot for assembly on squares of buttered bread. Each of the accompaniments gave an opportunity to vary the softness of the halibut, the sharpness of the shallot and luxuriant egg allowing us to tease out the flavours we fancied at each mouthful.

We’d made sure that the mains we ordered continued the seafood theme, with a tandoori fish curry and a sea bass fillet variously gracing the table. Both dishes were superbly realised and vied for our attention while neither emerged a clear winner. The curry was packed with a generous selection of cuts of fish, while the fillets were perfectly cooked with a suitably luxurious sauce that studded chestnuts through its variety. As I mentioned earlier, it’d been a testing 24 hours for my appetite so we opted for a light dessert option, just going for a few scoops of ice cream to round things off to make sure we also had a handle on the standard of the ice cream parlour too.

I’d been looking forward to checking out the Star Inn the Harbour for some time and unsure how high I should set my expectations. I’d expected good things but the standard exceeded those expectations at every turn. Each dish was well balanced and with complimentary elements while indulging Mr Pern’s desire to offer “Yorkshire Portions”. With pricing not too far off that which you’d expect from Loch Fyne, it’s hard to see many arguments against visiting next time you’re in Whitby. The next task I’ll lay at them is to convince me of how good fish and chips can be…

Disclaimer: While this meal was complimentary, opinions are impartial.