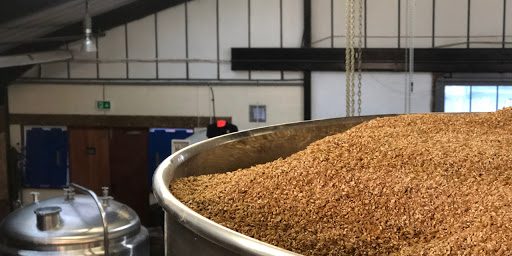 Brew York has been a regular haunt of mine since it opened less than two years ago. I’ve reflected before on the phenomenal critical and commercial success achieved by Brew York in such a short period of time, so when the opportunity came up to join them for a day to help brew the newest iteration of their award winning, and increasingly iconic, Tonkoko Stout I jumped at the chance to brew Empress Tonkoko. The guys have plans for expansion too, so I hoped to be able to grab a sneak peek at the spaces they’d be moving in to.

I didn’t manage the smoothest start to the day, singularly failing to obtain anything for breakfast due to the (early for me) 8am start time. I appreciate this was an unusually late start to a brew day, but I make no apologies for enjoying my lie ins before the arrival of a baby disrupts everything! Thankfully there was plentiful tea on offer to combat the early(ish) start as we chatted about what the day would involve. The group of roughly twenty included a range of beer bloggers and lucky fans who were happy to take the opportunity to get hands on with their favourite brewers.

The new version of the Tonkoko Stout we were working on was destined to be bigger and bolder than the previous iterations, kicking over the 10% marker on its way to the pump. After we’d worked our way through many cups of tea, the day started with the depositing of a huge amount of grain into a hopper ready to mix with water. The two batches of grain we worked through over the course of the day came to around a thousand kilos so there was a lot of heavy lifting involved both immediately, and correspondingly later to remove the grain from the mash tun later.

Previous discussions with the brewers at Brew York have reinforced their scientific approach to brewing, ensuring that the water they use is of the optimum pH balance and has the right mineral content for the intended beer. After a chat about how they achieve this, we sat down to get to grips with the rest of the ingredients that would make up the flavours for the beer to be infused with. The group boldly proclaimed that there would be no short cuts and so the tonka beans would be individually crushed then chopped by hand. Tonka beans give a flavour that’s hard to articulate, reminiscent of vanilla, but with a much greater depth of flavour. It turned out that chopping 750g of Tonka beans takes quite a long time, but we were through them in just a matter of hours along with the vanilla pods that would also go into the infusion.

With all the success they’ve already achieved, it’s been great to read in recent weeks about plans to expand Brew York into the adjacent former boxing gym. The spaces that the guys are taking over are impressively large and will be a fantastic addition to the food, drink and social scene in York. There’s space for plenty of visiting street food pop ups, but the headline food offering will come from Street Cleaver, who’s certain to come up with something unique and intriguing.

The rest of the day took in plenty more shovelling, cleaning, heating and moving of liquid between vessels as is required in the brewing of beer. If you want to read a much more technical account of the day, The Drunken Goat (who joined the day) has written an exhaustive account that’s worth a look. We finished up by naming the brew Empress Tonkoko and contemplating tasting it when the brewery celebrates its second birthday in April. That’s not the end of the story for this batch though as the majority of it will be aged in whiskey casks for a year ready for Tryanuary 2019 – definitely one not to miss out on! It goes without saying that we ended the day by thanking our hosts over a beer. I can’t wait to check out the Empress Tonkoko in a couple of months’ time.