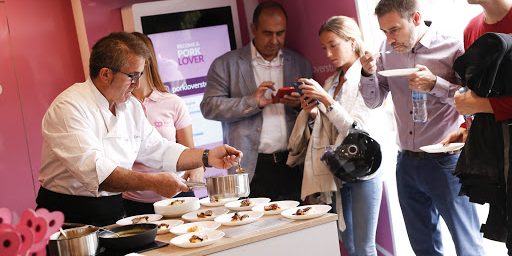 Last week I posted briefly about a visit I made to Leeds where I found a rather striking pink bus parked on Briggate that had made its way all the way from Spain to shout about the delights of European pork. I had a lovely visit, enjoying meeting some enthusiastic and knowledgeable pork ambassadors who had plenty of activities to try and morsels to sample.

We’re plenty enthusiastic in this country about pork, but only in particular forms. Bacon is regarded as something of a religion by many in this country, indeed lots of the best coffee shops in York offer some fabulous and hefty examples of the humble bacon butty. Further than that, we can be a little unimaginative beyond the occasional roast or chop other than the apparently ubiquitous pulling of every piece of pig sold from many street food outlets and pubs. The Pork Lovers Tour set out to spread the word over a journey of 10,000 kilometres, which visited 27 cities over 58 days.

On arrival, I was surprised at how well kitted out the bus was, with expanding sides giving plenty of space for kids to play games learning about the anatomy of pigs while those of us of more advanced years enjoyed the smells coming from the cooking station where a chef was putting the finishing touches to a joint of pork. The joint was cooked with onion and orange juice to a standard entirely beyond my expectations of anything cooked on a bus, no matter how well appointed. The chef also knocked up a delicious fresh salad to go with the meat, cleverly seasoned with cured pork that he’d dried and shattered to a powder.

Adorning the walls were large touchscreen ‘smartphones’ serving up all manner of information to the public about the provenance and health benefits of pork, framing it as an everyday alternative to the chicken we seem to consume on a meal-by-meal basis in this country. The staff on board the bus did a great job of expressing their passion for the product and suggesting various ways of offering up pork, from that dried and cured seasoning to more traditionally served cured Spanish hams and roast joints with sweet accompaniments such as that orange that I’d never before thought about flavouring pork with at home.

The guys managed to create a great atmosphere on the bus, giving out lots of information but remaining engaging and informal. It was a pleasure to catch up with them and chat about the pork industry in the UK and Europe while exchanging thoughts on different pork dishes. In fact, after writing this I’m going to be searching for some recipes to combine pork, sherry, chorizo and paprika. I guess I was listening!