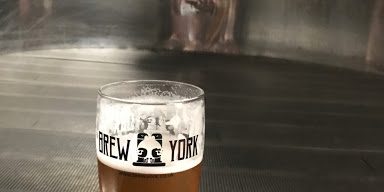 Tucked away on Walmgate is a York success story that deserves the many plaudits it’s earned since opening less than two years ago. After being caught up in the buffeting York received during the Christmas 2015 flood, Brew York made sure they didn’t succumb to the sort of setback that could have finished a less well planned business. They regrouped and made sure the quality of their beer would stand the business in good stead in the longer term. Since its opening, the tap room in Brew York has established itself as one of the best places to enjoy great beer in the centre of York, notably being somewhere that buzzes on a Friday and Saturday while not attracting the races and stag do crowd. With that hyper-local market locked in, a part of the focus has shifted to spreading the word wider, which has led to their beers being stocked by Tesco in 49 of their Yorkshire stores. The headliners in those shops are ‘Big Eagle IPA’, ‘Brew York, Brew York’ and ‘Little Eagle’, all of which are absolutely packed with flavour. Having had first hand experience of their beers already, I was happy to accept an invitation from Tesco to pop down and join a Brew York brewery tour.

I joined the Brew York brewery tour on a busy Saturday hosted by co-founder Lee Grabham, who spent an hour of his time walking through the brewing process for us in a refreshingly unvarnished manner. I’ve attended plenty of brewery tours that have involved lots of talk about how hard it is to brew great beer but little detail; Lee’s enthusiasm for the discussion of the chemistry in the process was a welcome change. We tried a variety of the beers on offer that undoubtedly were crowned by the award-winning Tonkoko milk stout. The challenges around brewing this one in volume make it sound like a tough ask to get into a retailer such as Tesco, but fingers crossed it will happen as this is a drink that deserves the widest possible audience.

Coincidentally, next weekend is the Brew York Summer Bash. What better excuse could there be to pop along and celebrate the success of a real asset to York?