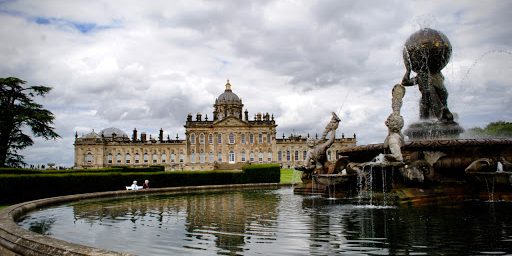 We’re well into food festival season now, with demos and markets popping up all across the region it seems. So while waiting for the York event in September, I took full advantage of an invitation from Tastecard to nip up to Castle Howard and attend the Great British Food Festival.

It goes without saying that Castle Howard is a stunning location for any event, with Brideshead dominating the view beyond the stalls on one side and rolling countryside in the other direction. Tickets to the event also included admission to the gardens and came in at the same price as a standard admission so there’s no arguing with the value.

We started the day with a stroll around the perimeter to get our bearings, checking out the food stalls and street food vendors we wanted to hit later on. The first food craving of the day was taken care of by currywurst (though I threw tradition to the wind and accepted a bun) before we hit upon a foraging walk for £3.50 each. The walk was led by Adele Nozedar whose immaculately researched books on the subject were realised into a fascinating 45 minutes that took in traditional medicines, alternative uses for weeds and all manner of greenery nibbling.

By this point I’d well and truly missed the cookie decorating competition that Tastecard had laid on (oops, sorry guys) but had time to catch Malton Cookery School‘s head tutor, Gilly Robinson, delivering a demo. Gilly had just completed an epic drive from The Spinnaker Tower where she’d been with Steph Moon to put on a Sky Dining event, but looked remarkably composed when she took the stage to knock up three delicious looking courses in 45 minutes.

By this time we were deserving of more sustenance before hitting the tents full of artisan producers. The Dilla Deli took care of that before we blew the budget on plenty of treats to bring home. There was plenty more going on through the day that we didn’t have time to catch including eating competitions, live music and more demos, not to mention the option to take in the glorious Castle Howard gardens. We had a lovely day and I’ll certainly be keeping an eye out for another Great British Food Festival when next year’s festival season rolls around.