Dewsnaps at the Churchill Hotel 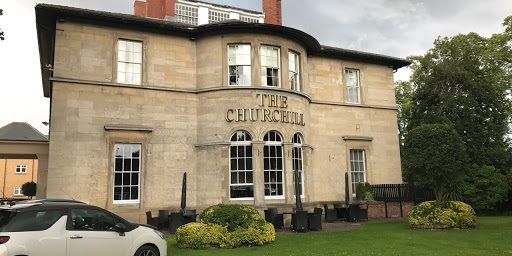 For restaurants based inside hotels, there’s always an element of struggle in being seen as a simple function of the building to service the guests rather than as a destination in its own right. There’re a couple of examples in York of restaurants who’ve developed their own reputation and, quite rightly, now attract their own audience. It’s in this context that it’s never really occurred to me to visit Dewsnaps at the Churchill Hotel on Bootham.

I’d been tipped off by a well regarded local supplier who works with the restaurant, that the head chef at Dewsnaps was doing some really interesting things that were worthy of a wider audience who have yet to happen upon the place. After checking out the menu, I booked a table on the strength of a range of small plates (“Grazing dishes”) including mushroom macaroons, crispy ham and chicken skin, hay smoked mackerel and confit duck egg yolk with jacket potato.

Moving onto the day before the meal, I went back to the site to look over those dishes again and was a bit crestfallen to find that the grazing dishes had been elbowed and only the conventional three course menu left. While that menu looked perfectly serviceable, it wasn’t what I’d signed up for so I went to cancel the reservation only to be turned around at the last minute by the promise of a one off menu constructed of those previously lost dishes.

We had seven plates to get through so didn’t get too stuck into the bread more than was required to establish its quality before the first dish of chicken, mushroom and truffle arrived. The meaty mushroom textures and soft chicken bode well for the rest of the meal, which proceeded with a beetroot centred plate. While attractive, the beetroot sponge at its centre didn’t contribute huge flavour to the dish so we moved onto a fish dish that was decorated with pleasing restraint and served alongside refreshing pieces of scorched watermelon.

The meat course centred on lamb that was motivated into strands with the merest hint of cutlery and freshened up by charred gem lettuce. Before we transitioned into the sweets there was one more fish dish, rather adventurously pairing fish with a savoury granita. A bit more of an interval between courses would have seen us set about the plate more quickly and prevented the granita melting, far from the most offensive thing I’ve ever been served but not a plate that rewarded the effort I’m sure the chef put into it.

Chocolate and strawberry themed plates were well executed and rounded out a well balanced sequence of courses that formed an enjoyable meal with some real high notes. The problem is that none of this stuff is actually on the menu any more. I’m confident I know the restaurant scene in York better than most and I had no idea any of this stuff was available. To spread the word and build an independent reputation as a restaurant rather than just a utility for a hotel takes time and considerable effort. I don’t know what the future holds for this place, but I can say that the tip I’d received to check this out was certainly justified. I’ll be keeping a closer eye on Dewsnaps at the Churchill Hotel in future.