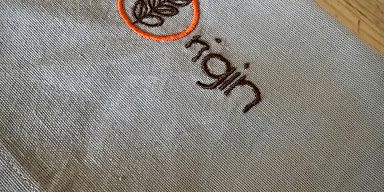 There have been a few supper clubs in York over the years. I’m not sure what’s happening with Set the Table these days after a lovely meal there some time ago but Sara Danesin Medio is going as strong as ever. A new entry to this scene comes from Origin York who, after a successful stint at the Pig & Pastry, were good enough to invite me along to their most recent event at Cox & Co out in Woodthorpe.

Cox & Co was a nice surprise given my unfamiliarity with the area. A nicely formed coffee shop that looks like it’s well worth a visit when in normal service. The venue had been simply decorated with place settings by the guys from Origin York, who are branching out from their day jobs in catering and hospitality to take the opportunity to cook the food they love for people who appreciate it.

The menu listed four courses that would be supplemented by a few snacks through the course of the evening, starting with a basket of bread for the table to share. Of the three loaves, we enjoyed the parsnip bread the most, something I’ll be having a stab at sometime! Parmesan and nut breads came too and were nicely done, if a little over facing. I think we’d have struggled to finish the rest of the meal if we’d worked our way through the lot!

The first warm plate was a foam of curried carrot covering beautiful mushrooms and topped with pine nuts and tarragon oil. Foam can be a tricky one to pull off, but the texture fared well against the softened mushrooms and set a high standard for the rest of the evening as we went into the first dish on the menu, “Weekend Waffles” with goats curd and onion.

The different textures of onion cut well against the goats curd with the soft waffle underpinning the dish and giving a sensible backdrop to the strong flavours. The next dish, named “The Spanish Lady” showcased octopus with flavours of chorizo and peppers. Octopus always represents a bit of a textural risk, but was perfectly cooked and presented here, another well balanced plate.

Moving onto the meat course we received plates of “Cheeky Veal”, a pun that the chef (surname “Veal”) couldn’t resist. Given my love of bad jokes, also one I’d have succumbed to. The veal was served with fresh horseradish that gave a tremendous, fresh contrast to the three pieces of meat on the plate. The fillet was cooked to do the ingredient justice and the tongue soft, while the braised cheek fell apart as it should to round off a great sequence of savoury dishes.

The first of two sweet dishes placed paw prints across the table, something that I’m painfully familiar with as the custodian (definitely not owner) of three cats. My position as a soppy pet owner also causes me to sympathise with the dish being presented above a picture of the dog that Origin wanted included in the meal, perhaps a sympathy that others would be less likely to extend. Regardless of canine affectations, popping candy livened up the chocolate parfait that also featured peppermint.

Last dish up was “Queen of Hearts”, featuring lemon and strawberry in a pastry case. I enjoyed the lemon filling that underpinned varying presentations of strawberry. The pastry element of the dish would have benefited from a touch more delicacy but, on balance, this was a fine place to end the sequence of dishes. We finished up with coffee, accompanied by coffee-filled chocolate spheres.

At £38 a head, this represents good value and the guys at Origin York are showing confidence and skill in both menu creation and the logistics of running an evening like this. The small, but well chosen, drinks menu worked well with the food, though would have benefited from a couple more accessibly priced wines with the only white on offer by the bottle being £30. I’ll be keeping an eye on these guys and wish them the best of luck with future events!