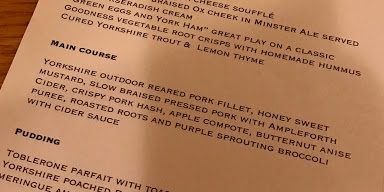 Steph Moon has forged a towering reputation across Yorkshire over the years that she’s cooked in our county. A stint in The Clocktower at Rudding Park really cemented her credentials as an icon of the region’s food scene and the wealth of experience previously gained traveling and working under luminaries such as Anton Mosimann has clearly contributed to a marvellously well-rounded chef. When news trickled through of a Steph Moon pop up at the Rattle Owl it was too much to resist, so we got ourselves booked in.

Having previously checked out the menu, I felt some uncertainty as we arrived. The starter was described as (deep breath) “A taste of York. Twice baked olde York cheese soufflé, donut of slow braised ox cheek in Minster ale served with horseradish cream, ‘Green eggs and York ham’ great play on a classic, goodness vegetable root crisps with homemade hummus, cured Yorkshire trout and lemon thyme”. Surely we weren’t going to attempt to eat all of those elements? Was I meant to have previously selected a dish? Deciding to ignore my concerns and feign ignorance should it become apparent I’d somehow cocked up my order, we relaxed into the evening, helped no end by the presence of local food scene heroes including Gilly Robinson from Malton Cookery School and master chocolatier Andrew Thwaite.

It didn’t take long for starters to arrive and lay to rest my curiosity, the lack of delay impressive in itself given how popular the event had turned out to be. We were indeed expected to eat all of the elements listed! Fortunately a deftness of touch on Steph’s part had judged the quantities perfectly and ensured that everything on the plate was light and not going to dent our appetites fatally before main courses. The soufflé and ‘donut’ hit the mark particularly well while nothing on the plate disappointed or felt out of place.

The main course presented pork in a variety of ways with fillet, braised and pressed pork and crispy pork hash being backed up by apple compote, anise flavoured butternut, cider sauce and roasted roots. With the number of bits and pieces on the plates, the presentation was remarkably restrained without excessive garnishes or unnecessary flourishes; another wonderfully rounded plate of food!

To round off the meal, we were presented with a Toblerone parfait accompanied by poached rhubarb. Scattered around the plate were a shard of meringue, wafer and shreds of curd to give range to the dish. Chocolate owls spiked a fun, decorative and tasty touch on the edge of the plate. The dessert even offered a touch of showbiz as, I’m reliably informed, that helping out backstage was the talented Debbie who appeared on Further Back in Time for Dinner (well worth a watch, all hail the Robshaw family!)

The Steph Moon pop up was a resounding success that required two sittings to fit in all the enthusiastic guests, with whom it coped admirably. Priced at £35 a head with a £15 wine pairing on offer there was absolutely nothing to fault in the value proposition, especially when factoring in the Roman remains in the basement of the Rattle Owl. Whenever you make it to this venue, it’s worth asking if there’s anyone with time to show you round, though bear in mind that this is a restaurant first and it would be rather arrogant to expect a personal tour from a server at the expense of other guests being served.

We’ll certainly be keeping an eye on Steph’s future activities and will be signed up the moment she’s back in York to cook.