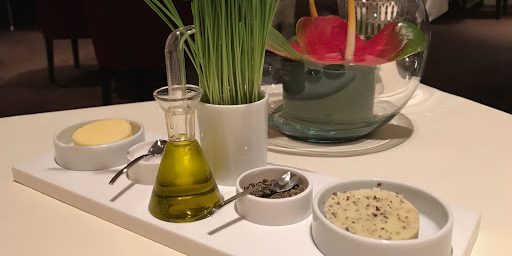 There was a wonderful moment of providence as we approached Sea Grill in Brussels. As my wife and I totted up the number of Michelin Stars we notched up to date, she joked that I should get an equivalent number of stars tattooed to complement the YoaF fork on my arm. It was at that precise moment we rounded a corner to be confronted with an open tattooist. Much to said wife’s relief, our lunch reservation didn’t allow time for rash decisions, so I’ll have to revisit that idea, but the prospect of increasing that number of stars by two with a visit to Seagrill Brussels quickly filled my mind.

Chef Yves Mattagne holds two stars at this seafood restaurant based in a Raddison Blu hotel and counts a string of awards which made the sensibly priced lunch menu irresistible on our last day in Brussels before heading back to Eurostar. The lunch menu comes in at €105 for what’s described as just three courses and matched wine. Don’t be misled into thinking this is a conventional three course meal though. In reading up, I’d found the strong probability that we’d be presented with more than three plates.

With two options available for each course and us being a party of two, we opted for maximum variety by sampling one of each of the six dishes and a package of the matched wines for each. Before any of the headline dishes arrived, we had some degustations to sample. The first of which was brown shrimp presented on a vegetable crisp before an absolutely stunning cod espuma that concealed wonderfully sweet red pepper chunks. Last of the snacks was a carefully plated selection including smoked eel, artichoke soup, neatly presented carrot and some dried seaweed.

As we started to worry about the depths of our appetites in the face of these delightful, though substantial, snacks, our starters of marinated salmon carpaccio and goose liver filled squids arrived. The squid came stunningly presented on confit chicory with flourishes of hazelnut. The attention to detail was show stopping with gold-covered fish roe and pretty, gold mushrooms reclining across the squid. The salmon carpaccio was no less striking, being presented with curry flavours, coconut and lightly pickled carrot. This was another stunningly balanced plate that was noticeably lighter than the bold chicory and liver flavours with the squid.

The presentation of the two main dishes was notably divergent, with one plate providing matching cylinders of the main elements of oyster-stuffed sole fillet and potato mousseline holding back a sauce on one side of the plate and an accent of cabbage. The other went for a more deconstructed look, highlighting each ingredient individually as sea bream, clams, lemongrass and onion made full use of the space. While there were some truly outstanding flavours on the plates, we both felt that the dishes were a little heavy, though there was absolutely no doubting the huge technical proficiency on show and the tastes certainly were complementary to each other. The lemongrass and clams worked particularly well, but one can’t help but feel that this was tipping toward complexity for its own sake.

As we drew toward the end of the Seagrill Brussels experience, a cheese trolley was wheeled over which took its best shot at matching the one housed at The Star Inn. I selected three of the most aggressively flavoured and pungent cheeses I could identify and wasn’t disappointed as I shared the wonderful scent with the rest of the dining room. The sweet alternative for this course was “chocolate” with confit orange, lemon sorbet and creamy white chocolate. Every part of the dish was fantastic, variously oozing chocolate from its centre, cleansing the palate and crunching with flavour.

Weighing in at €240 for two including matched wines, Seagrill Brussels couldn’t claim to be a cheap lunch, but in return for notching up two Michelin stars for the anticipated tattoo collection, it wasn’t an unfair price. The service was attentive, friendly and not overbearing and the food was technically superb if occasionally lacking a little delicacy of touch. After what’s become our traditional sprint to get on Eurostar, we recounted the dishes fondly and both tried not to bring up any more tattoo concepts.