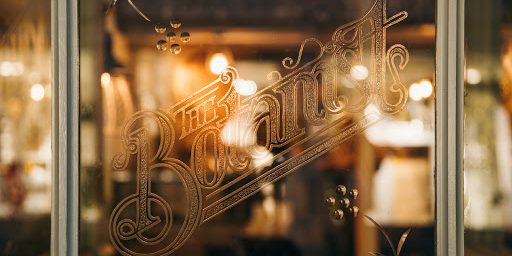 Mulberry Hall was a china and glassware shop on Stonegate and a prominent presence in York’s retail offering for many years until it closed toward the beginning of this year. While it occupied a large and attractive premises, I never really frequented it, never having quite the required level of disposable income to prioritise expensive dinner sets over expensive ingredients. Since its closure, a great deal of work has taken place to split the premises it occupied into a German Christmas shop and a food establishment, the fitting out of which I’ve been hearing a lot about from an extremely proud Liverpudlian chap in my local pub, so I gladly accepted an invitation to try the food and check out his handiwork at The Botanist York.

The Botanist have a number of other establishments, mainly across the north of England, that offer distinctive decor with great attention to detail, good quality food and a wide selection of cocktails and craft beers. The traditional interior lends itself well to the ambience on Stonegate, and when the Ice Trail comes round in a few weeks, it’ll look like a lovely warm haven to retreat to for refreshments.

At The Botanist York opening event that we attended, the front bar was very crowded with curious locals wanting to check out their new drinking option, so we found our way into the rather more sedate dining area toward the back of the building and considered the menu. My companion took the server’s advice and ordered a blackberry and mint julep and the salt and pepper onion petals captured my interest as a snack while working our way through the large menu.

We decided to share a homemade scotch egg starter and follow it with salmon en croute and a salt and pepper pork hanging kebab with sweet potato fries. The onion arrived briskly with no sign of opening night nerves, salty and moorish without being too overpowering. We really enjoyed picking at this as we waited for the scotch egg that, on arrival, had thankfully retained a runny consistency in the yolk and was surrounded by well-seasoned meat. The accompanying piccalilli hit the right notes in terms of flavour, but needed a bit more bite in its consistency.

As the mains arrived, I have to confess to being a bit surprised by the presentation. Chunks of the pork had been impaled on a skewer which dangled like a meaty pendulum above the fries. Perhaps even more surprisingly, this wasn’t as silly a contrivance as that might sound as an opening at the top allowed a sauce to flow downwards over the meat before dribbling onto the fries. I enjoyed the well-seasoned meat that retained its moisture a great deal, while the sweet potato fries were above average if a little lacking in crunch.

Reports on the salmon from the other side of the table were positive: light pastry and generous amounts of salmon contrasted nicely with the caper and tomato dressing, while the accompanying potato chips were well-seasoned.

Too full to continue to pudding, we went on a tour of the building, particularly enjoying the glassed-in roof space that would make a lovely private party area, before settling in for a beer tasting that showcased the diverse selection on offer.

We had a lovely evening that was further enhanced by the surprise appearance of the Puboholic and his lovely wife. Everything we ate was of a good standard and the refurbishment of the Botanist York is just as striking as my proudly Scouse friend promised.

Disclaimer: While the meal described here was complimentary all opinions are my own